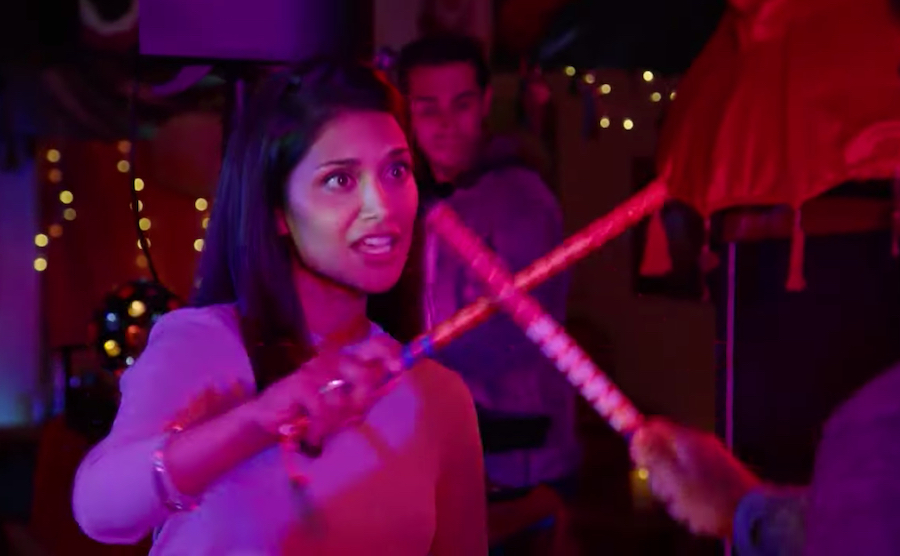 Every Holiday Season, Christmas movies are a dime-a-dozen. Actually, check that – more like a dime-a-quadrillion. Between the Hallmark Channel and Freeform alone, there are approximately 2,963 new Christmas movies released every year. Even the “forgotten holiday” of Thanksgiving has a respectable number of mainstream flicks that folks can enjoy in November.

Emerging among the sea of Christmas movies this year is a little gem revolving around a lesser-known holiday, especially here in America: Diwali. This ancient festival of lights is the background for Comedy Central’s original film Hot Mess Holiday, premiering tonight (December 11) and featuring an array of Indian-American talent including Melanie Chandra, Sundra Jindal, Kal Penn, Lilly Singh, and more.

Well, look who it is. #HotMessHoliday premieres Saturday, December 11 at 7/6c. @RichaMoorjani@SurinaAndMelpic.twitter.com/pt5CYAokhm

Diwali, typically celebrated between mid-October and mid-November (this year it was celebrated from November 2 to the 6th), is a major 5-day holiday observed by those of the Hindu, Jain, Sikh, and Buddhist faiths and originated thousands of years ago in India. The festival is a time to honor the goddess of prosperity, Lakshmi, and "victory of light over darkness, good over evil, and knowledge over ignorance". Observers celebrate by wearing their best fits, fixing up their homes, and decorating with special oil lamps called diyas as well as beautiful art patterns called rangolis, typically made from fine powders or sand. If you’ve never seen a rangoli being made, you are missing out!

Each day of the festival requires different activities and traditions to be performed that day, including prayers, games, special meals, and candles. It’s a joyous, colorful occasion that unfortunately gets overshadowed by the “traditional” holidays in America but which is crucial to the cultures of many South Asians living in this country.

Hot Mess Holiday follows a typical formula of a typical holiday movie – a young woman is dumped by her fiancé during the holidays and her bff is determined to help her move on, then hijinks and shenanigans ensue. The only thing that really distinguishes this movie from other holiday comedies is the holiday in which it is set, namely Diwali. Main character Melanie (Chandra, who also serves as executive producer) is a relatable gal going through relatable things, but she just happens to be an Indian-American and her adventures take place amongst the backdrop of an Indian holiday.

This film is a great way to showcase this lesser-known Fall holiday and present it to audiences in such a casual and loving way, exposing us to the traditions of folks who live right next door to us. So the next time you run into your Indian-American friends, wish them “Shush Deepavali”!