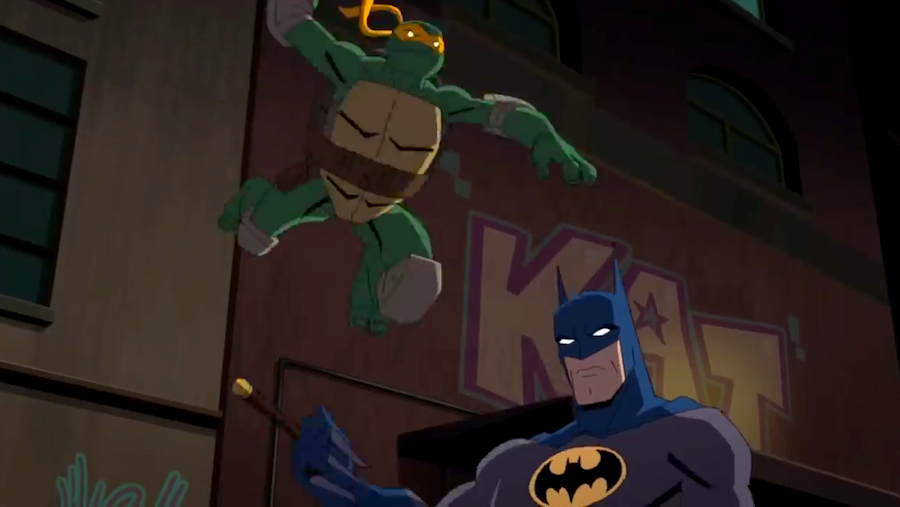 Batman has had run-ins over the years with a diverse group of characters throughout his illustrious career. From psychotic clowns and a Crocodile man to exploding penguins and terrifying scarecrows, there is no shortage of oddballs that the Dark Knight has encountered. Gotham’s Caped Crusader has even fought other heroes like the Man of Steel, which resulted in an over-bloated mess that we all can’t forget (looking at you, Batman v. Superman). And that is not his only showdown with an alien. At one point, good ole Bruce Wayne suited up to take on the infamous extraterrestrial hunter The Predator. It seems everyone wants a shot at the title, and Batman is glad to take on all comers. Now it seems his next bout will be against... the Teenage Mutant Ninja Turtles.

The Batman vs. Teenage Mutant Ninja Turtles trailer looks exactly as great as I imagined it would. The very notion of Batman going up against and then coming together to work with the famous amphibious crime fighters sounds like such a fun crossover. It is very exciting to see Batman, Batgirl, and Robin forge an unlikely alliance with the Teenage Mutant Ninja Turtles. The reasoning for these two powerhouses of comic lore to come together would have to be good for this to make sense, and the opposing force or forces do not disappoint. Shredder and his clan of ninjas will be teaming up with Ra's al Ghul and his clan of ninjas, but that is not all. Then you’ve got the ooze that created the turtles, the Joker, and the rest of Batman gallery of villains being released from their cells. So with the army of ninjas, a pair of psychotic leaders bent on world domination, and literally every super criminal in Gotham on the loose, its all hands and turtle appendages on deck for this one.

This whole thing feels legendary not only because it is the first feature-length film to showcase this epic battle between two of the world’s most lovable characters, but it will also make history as it has pulled off a rather iconic first. Troy Baker, who is notoriously known for voicing the Caped Crusader in the Batman: Telltale Series video game and various LEGO DC Comics video games, will be voicing not only Batman but also his arch-nemesis The Joker, whom Baker voiced in the Batman: Arkham game series. Troy will be the first person ever to provide his vocal talents for both characters. Rounding out the rest of the talented voice cast are some of the best names in the game today, including Golden Globe winner Darren Criss as well as Tara Strong, John DiMaggio, Rachel Bloom, and Cas Anvar, just to name a few.

Crossovers are a dangerous game and some don’t always pan out, even with Batman as part of the main event. The turtles have also had their struggles in the reboot game. So, the best way to remedy this issue for these two iconic franchises is to work together. As a huge fan of both Batman and the Ninja Turtles growing up, this unlikely combination is just what the doctor ordered, not just the properties but the fans as well. The miniseries in the comics, Batman/Teenage Mutant Ninja Turtles, was a solid entry for both parties’ legacies and resonated very well with fans. So it's appropriate the film’s plot is loosely based on the solid source material. This unique premise, along with this stellar voice casting line-up, makes this showdown a definite reason for fans of all ages to mark their calendars. The Dark Knight and TMNT crossover event looks to be a fine example of how truly awesome it can be when the two right worlds collide.

Batman vs. Teenage Mutant Ninja Turtles will be available in Digital HD On-Demand form on May 14, with a 4K Ultra HD Combo Pack and Blu-Ray Combo Pack arriving later on June 4.