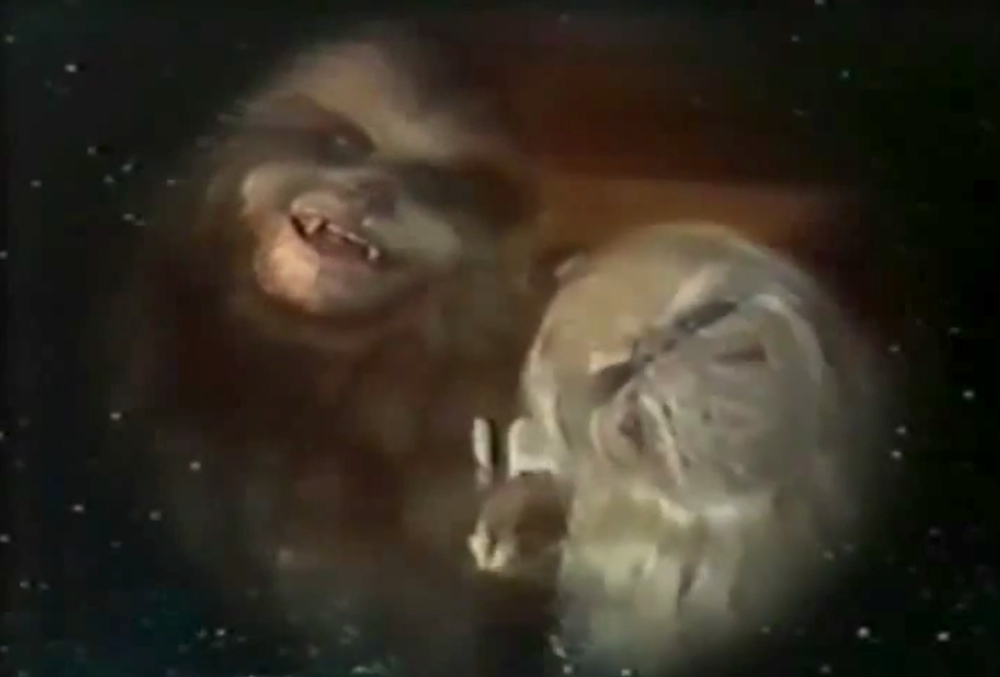 After the mind-blowing success of Star Wars: Episode IV A New Hope (which, at that point, was just the first Star Wars movie), George Lucas and friends realized that they had a cash cow on their hands and decided that there were lots more Star Wars stories to tell (and sell). After careful deliberation, they to focus on one character whose home life everyone wanted to know more about: Chewbacca. Thus the delightful insanity of the Star Wars Holiday Special was born.

Released in 1978, and made in a galaxy far, far away, the Star Wars Holiday Special only ever aired on television once and has since hardly been mentioned except by Star Wars diehards. It’s not really much of a wonder as to why it’s never spoken of -- the special is a trainwreck. But it’s a glorious trainwreck, so cringeworthy that it’s on the same level of The Room (which I love). I have a deep appreciation for completely insane movies, and this one certainly fit the bill.

The Star Wars Holiday Special opens with a loud-mouth announcer barking out the various names of folks we will see in this special, including “Chewbacca’s Family! His wife, Mala! His father, Itchy! His son, Lumpy!” (What made this particularly strange is that his family had full names, but they are only referred to BY their loving nicknames).

Following our introduction to Chewbacca’s family, we learn that they are celebrating Life Day (so, Christmas) and are patiently awaiting the arrival of their loving son, father, and husband, who has blasted himself into hyperspace with Han Solo. The first 15 minutes or so simply consist of Lumpy, Itchy, and Mala barking at each other in Wookiese. Mala essentially is Chewbacca sans the guns, while Lumpy resembles a rejected Tim Burton creation. Despite Lumpy’s shortcomings, he is rather endearing, and his excitement over his special toy -- a hologram that projects dancing acrobatic drag queen leprechauns -- is adorable. The real disaster of the family is Itchy, who resembles a cross between a Planet of the Apes puppet and the aboniamble snowman. Perhaps if I looked like that, I would be politely nicknamed “Itchy” as well.

As Chewbacca’s family waits for their favorite Wookie, Mala realizes that it is Life Day and that she should probably cook dinner. She pops in a tape of Harvey Korman dressed in drag as a sexy pink chef alien, complete with floppy boobies and four arms. There is absolutely no point to this scene beyond seeing Harvey Korman in drag as a sexy pink chef alien, which I hadn't realized is an image that the world actually does need to see until I saw it.

As Mala cooks, the family’s mysterious trader friend appears with Life Day gifts. It’s pretty clear that he wants some wookie lovin’ from Mala, as he presents her son with the nicest gift out of everyone, and he forces Mala to kiss him before presenting her with his gift (run, Mala, run!). He then presents Itchy with a glorified salon hair dryer that turns out to be -- wait for it -- a connection to a sex phone hotline. How this was deemed family-appropriate will forever remain a mystery. Old abominable snowman Itchy proceeds to get his rocks off as his erotic fantasy (played by Diahann Carroll) coos to him, “Ooo! Oo! We are excited, aren’t we?” It is a disturbing yet fascinating scene. Thankfully, adorable Lumpy isn’t present for any of this, but poor Mala is forced to watch her father-in-law have a great time with his sexbot. Poor, poor Mala. I’m not sure how else to describe my endless fascination with this scene, so I will just let you watch (NSFW?):

As Mala burns the stew, she decides that she should check in with a few of Chewbacca’s friends to see where her husband could be. While Luke (Mark Hamill) talks to her, he and R2D2 proceed to blow up a spaceship in the background (because Luke is useless). Luke also looks weirdly calm as he carries on a perfectly normal conversation with Mala, who growls at him the entire time. He also appears to flirt with Mala. What is it with everyone flirting with Mala?! She just wants her husband back. Is she particularly sexy for a wookie? Is Luke into something that’s purposely kept as hidden as possible?

I honestly could write pages on all of the delightfully nutso moments in the Star Wars Holiday Special, ranging from Bea Arthur serenading a lounge Cabaret-style, Princess Leia’s painful Life Day monologue, to Jefferson Starship singing into a vibrator. The only part of the film that fans do seem to acknowledge is a random cartoon that Lumpy watches, in which Luke, Chewy, and crew meet the great Boba Fett. I personally think that Boba Fett probably has the best introduction of any Star Wars character, as he comes riding in on the Loch Ness Monster. There is no explanation as to why the Loch Ness Monster is in space, or how Boba Fett came to own the Loch Ness Monster; he simply rides in and says, “Hi.”

The entire special can be found in several corners of the YouTubes, but the one below seems to be the best quality:

As we wait another whole year for the final episode of the Star Wars Sequel Trilogy, add the Star Wars Holiday Special to your viewing list. We should always celebrate Star Wars's forgotten past that, thanks to the Internet Age, can be enjoyed over and over and over...