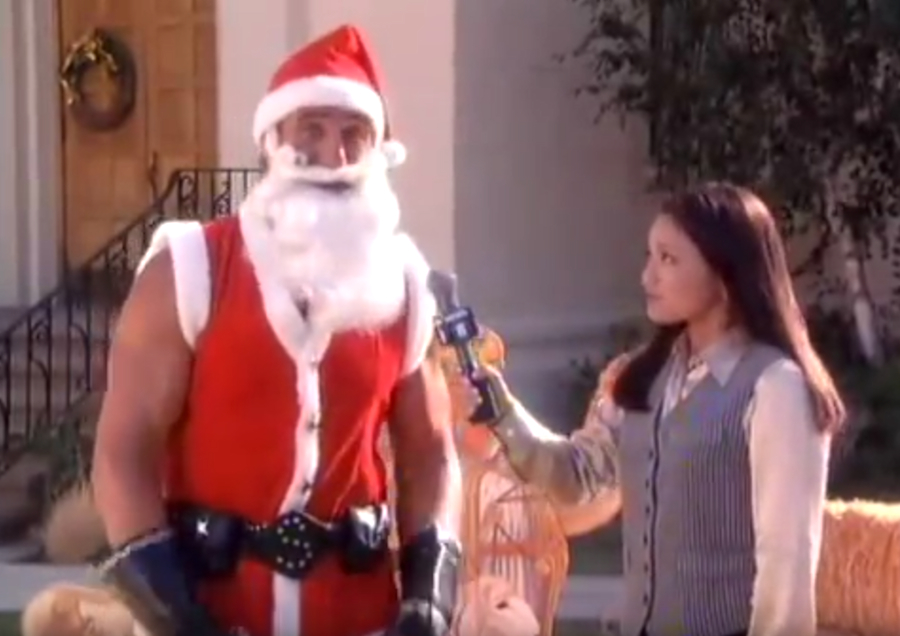 I imagine that the pitch for Santa with Muscles sounded something like this: “It’s just like The Santa Clause, but with Hulk Hogan and evil scientists. Oh and an Italian stereotype elf. And let’s throw in some catacombs for good measure.”

Some sort of version of that pitch did come to fruition with Santa with Muscles, one of the most bizarre and wonderful Christmas movies ever made. Santa with Muscles stars Hulk Hogan minus his signature mullet and also features a very young Mila Kunis as an orphan. It is truly one of the strangest films I have ever seen (it borders on being as strange as Silent Night, Deadly Night 2, one of my all-time favorites) and therefore has become one of my favorite Christmas movies.

The film begins with Hogan living as a billionaire who enjoys challenging his staff to random fights while attempting to steal faux boxes. In the first five minutes, he throws one of his gardeners into the bushes and cries, “Never stop to smell the roses!” before taking on a nunchuck-wielding chef. After this hooplah, Hogan decides to go paintballing with his buddies and the real absurdity of the film begins. It makes absolutely no sense and is therefore amazing:

Hogan then proceeds to get into a fight with the police before escaping into a mall, where there is no Santa. Easily the most offensive and insane character is then introduced: a knockoff Joe Pesci who encompasses every lame Italian stereotype of the last 100 years. Knockoff Joe Pesci is technically an elf named Lenny, and he owes money to a mysterious benefactor and frequently gestures with his hands (because he's Italian, you see). I found Lenny to be quite fascinating, as every five seconds I expected him to cry, “hey, bada-bing!” and “I like-a pizza!” He never did, but the character’s exaggerated mannerisms and confusion become less offensive and slowly become more hilarious.

Following a fight, Hogan falls down a trash chute (as we are all wont to do) and wakes up believing that he is Santa Claus. Lenny realizes that he is a billionaire whom he can rob, and dresses up this new Santa who then proceeds to get into a street fight with some thugs (who try to steal a globe full of money by hiding it under their shirt). Instead of screaming or once again calling the police, the entire mall cheers on this Santa with muscles, who then decides that he should try to go and save the neighborhood orphanage.

Since at this point the movie was deemed not insane enough, a second subplot is introduced featuring Ed Begley Jr. as another evil billionaire/mad scientist who has his own evil science squad, featuring an incredibly creepy doctor who uses his stethoscope as nunchucks, Indiana Jones’s cousin that no one talks about, a woman who has electric hands, and what appears to be a mole in clothes who is proficient with stink gas. Their mission is to steal glowing purple crystals from the catacombs underneath the orphanage where the children have built their playhouse. I’m not even going to try to fathom why their caretakers would deem it was safe for children to play in catacombs (perhaps they are big fans of Edgar Allen Poe?), as the mad scientist squad is far more fascinating. There is never an explanation as to why or how this group came together; simply that they have bonded to claim the glowing purple stones. Sadly, I could not find a clip of the mad scientist squad on YouTube, but rest assured, it’s amazing.

I honestly don’t see how anyone could not like Santa with Muscles. It’s difficult to tell if the filmmakers meant for it to be a comedy, a heartwarming Christmas tale, or simply an excuse for Hulk Hogan to wrestle people, but either way, the result is great. I love the fact that Hulk Hogan dons a Santa outfit that looks like it should be worn in a more provocative setting and that onlookers yell cries of support while he fights, such as “Look out, Santa, he’s got a candy cane!” Santa with Muscles is certainly not your traditional Christmas fare, but it is the ideal movie to watch with your friends or your cool cousins who enjoy absurd movies as much as you do.

As an extra holiday gift, here is a supercut of all the fight scenes from Santa with Muscles. Enjoy! (There’s an extra bonus: you get to see a glimpse of the mad scientist squad!)