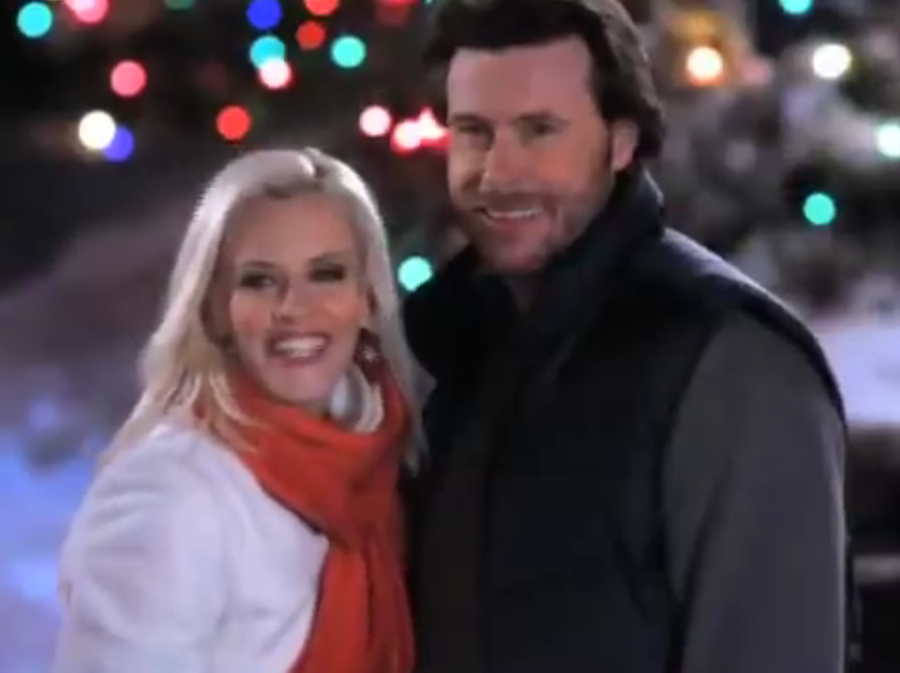 Santa Baby 2: Christmas Maybe (which was made in 2009, so I will refrain from “Call Me Maybe” jokes) is the sequel to ABC Family’s Santa Baby, which came out in 2006. Both films feature Jenny McCarthy as Santa’s high-powered businesswoman daughter, Mary Claus (no, really), who helps Santa save Christmas.

For this review, I had the joy of watching the sequel, which felt more like an educational marketing film I watched in college rather than a Christmas movie. The film, which opens up with a montage of all of Santa’s new hobbies -- including leading a jazzercise class and becoming an Opera singer -- was fun, but the segway into Mary’s life as a marketing exec in NYC was a little bit too much of a jump. I will say that her character slightly terrified me, as before I became a writer, I worked in marketing, and I have dealt with hyped-up-on-multiple-lattes-and-possibly-other-substances-execs like McCarthy’s character. I will say that I do want Mary’s assistant in the film, an adorable little queen who was perpetually dressed in purple. Her assistant reminded me of an even fishier version of Ongina from “RuPaul’s Drag Race”, and I desperately want one that comes in pink (I am convinced that her assistant was mass-created in Santa’s workshop). Her boyfriend, Luke, on the other hand (played by a very bored Dean McDermott), looked as though he had not left his apartment in months and appeared to have left his razor somewhere back at the North Pole. As we learn that Luke is a postman who makes his rounds around NYC, it becomes increasingly clear that the man has never actually interacted with human beings before except for peppy Mary and possibly the inevitable delivery boy who brings him Chinese take-out (we never actually see this person, but I am convinced that he must exist in the universe of this film).

We transition into Mary’s holiday Christmas party, where we meet Collin (Kristen Holden-Ried), another high-powered marketing exec from London, who has a British/Australian/Irish/New York/Canadian accent. Collin and Mary are going to merge their companies together, and we can tell from Collin’s smug smile that he’s going to be trouble (darn those pesky Brits!). As Collin and Mary flirt unabashedly in front of Luke, who is now on his fifth beer, Santa suddenly busts out the sax and serenades the crowd with some smooth jazz, yet another one of his hobbies. Mary screams at her father that he should be in the North Pole, doing his job, nag-nag-nag, while Luke and Santa discuss how much of a cool cat Santa is for being in a jazz quartet. Mary continues to shriek at her father (which she pretty much continues to do throughout the whole film) and puts Luke in charge of babysitting her father and his random elf/manager/stoner buddy, Skip the Elf (Gabe Khouth). Luke promptly gets her father and Skip arrested after having a brawl at the mall (as one does around the holidays), and Mary screams that they all must go back to the North Pole.

From this point, on the film transforms into either a statement on labor relations in China or advice on how to run a successful marketing firm at Christmas. Mary attempts to derail the “elven apocalypse”, which is bound to happen since her father has been off finding his spirit animal in Santa Fe, only to discover an equally ambitious marketing guru named Teri (Kelly Stables), who baits the elves to turn against Mary with cookies. I could not tell if the cookies were meant to be drugs or a symbol for currency, but, man, do those cookies work! I was also perplexed by the elves' complete lack of education, which I also took to be some sort of political statement on the lack of education that factory workers in third world countries face. In the end, Mary and company manage to show Teri that the true meaning of Christmas is to share it with someone you love (no Christmas joy for you, single people!) and save Christmas. Oh, and Collin briefly shows up again, takes Mary on a date, and then she goes to visit him in London while she is still with Luke. So… it's okay to have two men as long as it's at Christmastime? That’s the moral I took from the film.

Santa Baby 2 was probably the most perplexing of the holiday films I have reviewed so far... which is saying something. It didn’t make me laugh nearly as hard as Santa Claus or Santa’s Slay did, but I think that this is because this film actually had a cohesive plot to it. The film does have its moments of hilarity, such as when Santa hands Mary his hat to take over Christmas, and she is “moved”... or Teri and Skip’s extremely uncomfortable hug at the end. Out of all of the films I have reviewed, Santa Baby 2 is definitely the best one to watch with children -- it is the least terrifying, makes the most sense, and hopefully the labor relations statement will go over their head. The nice thing about this film is that, while children will watch the parts that are actually meant to be funny, and you will laugh at the parts that are not, you will also learn a bit about how to better market yourself, how to motivate employees (cookies!), how to break up a strike, how to efficiently wrap gifts, and how to save Christmas. How many holiday movies can say that?