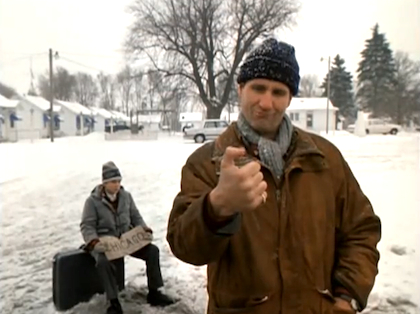 Aw, Thanksgiving. The nearly-forgotten holiday. In America, it has gotten to a point where Thanksgiving is a passing thought between Halloween and Christmas, somewhere along the lines of “Oh, I should probably do the dishes today.” Regardless of this, we still get together with our families every year, which usually results in our drunk aunt/uncle complaining about the president before falling asleep on the couch, a sullen teenager sulking on the couch and texting every five seconds or else they will explode, a frazzled mother running around the kitchen in fear that the turkey will break free from the oven, and a father who may or may not get out his pajamas (or perhaps you are a freak of nature and you have a nice, normal family... if so, please adopt me). Then following this debacle, we all pile into our cars and drive to Wal-Mart, where it is highly possible that you may either get into a fist fight or get pepper-sprayed over an Xbox.

Back in the wonder years, Americans actually celebrated Thanksgiving -- and even released movies with plots centered around it. One of these long-lost films was entitled Dutch, a strange romp produced by John Hughes and directed by Peter Fairman. The film stars a shockingly young Ed O’Neill and a baby-faced Ethan Embry as they embark on a road trip from hell to get home in time for Thanksgiving. I’m not entirely sure if I would call Dutch a comedy -- it borders more on a fascinating battle of wits between a psychopathic 12-year-old and a jaded Everyman. For that reason alone, I rather enjoyed it.

Dutch opens with a bunch of insufferable rich people shaming poor sweet JoBeth Williams because she is the ex-wife of a jackass. Her jackass ex-husband informs her that he will not take their son over the Thanksgiving holidays because, as mentioned, he is a jackass. While all of this occurs, her current boyfriend (O’Neill), dressed like your neighborhood hipster, proceeds to lock himself on the front porch and gets attacked by a dog, as is wont to happen. Due to the caveat that her son now has nowhere to go for Thanksgiving, her boyfriend must go pick him up from his boarding school.

I’m not entirely certain that it is a boarding school that her son, Doyle (Embry), attends as much as a very posh mental institution for boys. Doyle’s first scene features him obsessively cleaning his computer’s laptop to classical music, which clearly establishes that he is probably a serial killer. He later dismisses what he deems to be “the help” before going to practice karate by himself in a dimly lit gym. It’s pretty clear that Doyle’s parents are aware of the fact that their son is a future Bond villain, hence why they have locked him away as far as possible. Little does the poor bastard O’Neill realize that he is on his way to pick up Hannibal Lecter Jr., and thus is surprised when Doyle shoots him in the butt with a BB gun. All of this occurs in roughly the first 15 minutes and it’s fabulous.

Thus begins the strange journey of Young O’Neill and Demented Doyle. Highlights of their trip include: O’Neill attempting to serenade Doyle and looking like a deranged clown the entire time; taking Doyle to a fireworks store (because, yes, that’s what you want to do with a disturbed child); buying Doyle a pack of racy playing cards in which, every time they appear delightfully, trashy music plays. But m favorite moment of their journey may be a brief moment in which they visit where the next season of “American Horror Story” will surely take place: a shady truck stop diner. On one side of Doyle sits a woman with dragon claws and shriveled skin, and on the other side sits a trucker who looks as though he has eaten five children prior to arriving at the truckstop and will eat Doyle next.

As the film progresses, it only gets stranger. O’Neill and Doyle end up with some road stop hookers who make Doyle feel “horny”, and later Doyle poses as a schizophrenic and busts out his karate moves on some unsuspecting guards. Doyle’s increasingly strange behavior is written off as him being a snooty rich boy or a troubled teen, but I’m fairly certain that he is just a psychopath. Even when Doyle does show acts of kindness, it appears to be because he is mimicking those around him, like a mini-Ted Bundy. I found that I couldn’t keep my eyes off Doyle, and wondering when, or if, he was actually going to kill anyone (perhaps that happens in the sequel that never happened: Dutch 2: Doyle’s Revenge). Still, I did find the film weirdly charming. I couldn’t help but root for Doyle, despite his tendencies, as well as for O’Neill, who was tasked with this challenge. I actually think that Dutch may be the ideal Thanksgiving film -- it has a dysfunctional family, features people getting shot with a BB gun, and a man mutilating a turkey. And in the end, isn’t all of that what you really need to have a happy Thanksgiving?