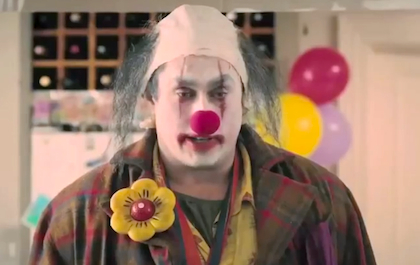 Fellow web content streamers, are you tired of looking on your video game system, Roku, or whatever it is you use to instantly watch movies and TV shows on Netflix, and only finding the same things over and over again? Fear not, for I am a Netflix archeologist. I have explored the deepest trenches of online streaming on a quest for the more obscure, the more bizarre, and the most entertaining cinematic gems hidden inside of Netflix’s database. As a result, I have seen a lot of crap in my day, folks, but I’ve also witnessed a lot of greatness hoping to be (re)discovered. This time around, I bring to you the 2012 horror-comedy classic (for me, it’s a classic), Stitches.

Stitches takes use across the pond, but not to merry ol’ England -- instead we are taken to the whiskey-soaked depths of Ireland! It is a horror-comedy like no other. It bleeds scary scenes and humor together like nothing I have ever seen. Stitches provides scares when it wants to and jokes that always land (a rarity for most horror-comedies). But what is truly special about this Irish horror-comedy is the surprising attention to detail it has, and an ending that makes everything come full circle.

Stitches starts off by introducing us to Richard Grindle, better known as Stiches the Clown (played by an Irish stand-up comic Ross Noble). Stitches is introduced to us by smoking a cigarette and having sex with a woman (who presumably has a clown fetish) in a trailer. The woman asks Stitches about a painted egg. “They made me do it. Some clown thing. I don’t know.” He sort of explains. An alarm goes off, and Stitches realizes he is late for a boy named Tom’s birthday party where he must perform his clown tricks. After stating, “I’ve got to do some little bastard’s birthday,” Stitches leaves the woman and drives off to the birthday party. He absolutely bombs at the party and is a major disappointment to the children. The kids ridicule Stitches and play pranks on him, which accidently ends fatally for the disgruntled clown. Later on, Tom visits Stitches’s grave, where he sees a group of clowns performing a ritual with eggs and party poppers. Yes, this film dares to go there. The clowns threaten Tom by telling him, “You are not our charge, but know this: a clown that never finishes a party can never rest in peace, and the joke is never as funny the second time around.”

We flash forward six years later for Tom’s sixteenth birthday, which, of course, is also the anniversary of Stitches’s death. The film displays all the kids' names, shows us how the kids have aged, and how they haven’t changed too much in six years. If you pay attention to the initial birthday party when they are all children, you will see that pretty much all of these details are laid out when the teenagers are kids. As for Tom, he is an awkward and unpopular young man who is still haunted by witnessing Stiches’s death at his own birthday party. Just like in real life, some of the kids are friends with Tom and some… are basically the opposite. Tom’s best friend is Vinny, who is a complete horn dog but doesn’t have the best success with women. One of Tom’s other friends is Bulger, who grew up to be a fat-n-sassy gay kid. Tom’s final friend is Richie, who likes photography and kind of just goes with the flow. There’s actually not much about Richie. Tom’s neighbor and crush Kate is literally the girl-next-door. As for people who aren’t Tom’s friends, we got Sarah and Paul, a couple that enjoys bullying Tom and getting him to do their homework.

Are there flaws with Stitches? Of course, but that also makes it fun. It has horror movie clichés and teen comedy movie clichés, but it's completely self-aware. The kids are all kind of stereotypes we have seen before, but they feel like "true" stereotypes. You can pretty much guess that Tom’s friends will have him throw a house party, effectively getting everybody from the original birthday party over, six years later. So, naturally, after Tom daydreams about scary killer clowns and plenty of gore during school, Stitches's re-animated corpse rises from the grave that night to exact his revenge. Ross Noble particularly shines at the party as Stitches, delivering a role reminiscent of Robert Englund’s Freddy Krueger. As a film, what Stitches gives the viewer by the end is essentially a genius combination of Superbad and Stephen King’s It. So sit back, relax, and by the end, everybody should be happy!

Check out the (slightly NSFW) trailer below!