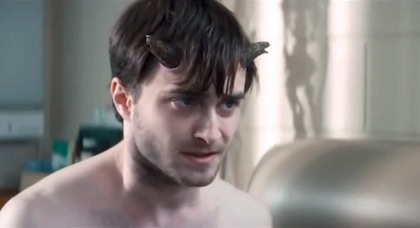 Who doesn’t love a Daniel Radcliffe movie? And no, I’m not talking about the Harry Potter series! I’m talking about his film Horns, which was presented at the 2013 Toronto Film Festival. Haven’t heard of the movie before? You aren't alone, as the film received little fanfare and had a short theatrical run in October. I myself just stumbled across this masterpiece the other night on Netflix, and it's definitely worth the two hours of your time to watch it! Here are 4 reasons why:

1. You get to hear Dan-Rad’s American accent

This has to be one of my favorite parts of this movie. Everytime I look at Daniel Radcliffe, I expect to hear his British accent. He is Harry Potter, and Harry Potter is Daniel Radcliffe. Catch my drift? It’s odd hearing the American accent while looking at his face. At times, you can hear a bit of the British accent coming through, which is hilarious. He did a great job though!

2. It’s dark and trippy, but intriguing

So, basically, Daniel’s character, Ig, is blamed for the murder of his girlfriend, which of course, he can’t remember. He wakes up one morning to find horns on his head, which turn out to have special powers -- dun, dun, DUN! He sets out to find the killer, and you find out things that Ig doesn’t even know yet. The horns force people to reveal their deepest, darkest secrets (or demons) to him, and they seek his permission to enact them. There are constant flashbacks, and you’re on the edge of your seat wanting more. You just want to know what the hell is happening! (see what I did there?)

3. He has creepy horns on his head the majority of the movie

Which I already mentioned above, but this deserves another mention. The horns start out super tiny, barely noticeable. Throughout the film, they get bigger and more disgusting, to the point where Ig tries to rip them off (ew). I think it’s safe to say his head has been the major focal point of his films -- Harry’s scar and now the horns!

4. The supporting cast is awesome

Juno Temple plays Ig’s murdered girlfriend, Merrin, who’s not as perfect as you’d originally think… Max Minghella plays Ig’s best friend, whom you think is one of the innocent characters, but you later find out he has a much darker secret of his own! Joe Anderson plays Ig's alcoholic, drug-addicted older brother who becomes a suspect in Merrin’s murder, and you’ll see why the suspicion is totally valid. Also, Heather Graham makes an appearance as the disgustingly vain waitress, whom Ig unleashes his powers on.

So, if that wasn’t enough for you to watch the movie, hopefully the trailer will convince you. Trust me, it’s worth it!