COUNTDOWN TO OSCAR: 'The Theory of Everything' 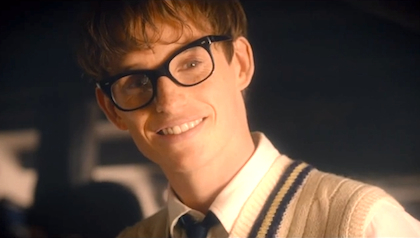 There is a point somewhere towards the middle of The Theory of Everything when Professor Hawking casually mentions that what he believes does not matter when it comes to physics. To him, the fabric of life itself is what it is, regardless of how we interpret it. Basically, our thoughts will not change what already is. Luckily for us, though, art is much more malleable than reality, and through it we are able to take the known world and the things in it and give a deeper or meaning, or at least the illusion of one. And that is, in the end, essentially what The Theory of Everything has accomplished.

The Theory of Everything tells the story of Professor Stephen Hawking (Eddie Redmayne), the renowned physicist who was stricken with Motor Neuron Disease while attending Cambridge University in 1963. He was told that he would only have two years to live, but by some miracle, Hawking managed to defy the odds and still continues to do so this very day, 52 years after his diagnosis. During this harrowing period, he managed to not only become a doctor and a father, but he also published some of the most groundbreaking theories ever about Time, the Universe, and its origins. And through those trying and difficult times, it was his wife Jane (Felicity Jones) that stood by him and helped raise the family and the spirits of one the most important figures in the history of science.

Professor Hawking has led an incredible life, and one that certainly merited attention from the world of filmdom. This is a movie that is driven by the deep feelings of its lead characters. Redmayne and Jones are both marvelous in their respective roles and very much worthy of the praise and nominations that they have received. The tragedy of what happened to Professor Hawking needs very little explanation, as we can only imagine how difficult life must have been for him as his physical abilities were slowly stripped away. The real story here is the love and affection that two people had for one another despite the obstacles thrown their way. I would also like to note that this moving story is filmed rather beautifully and normally that would be something of a throwaway compliment, but this time around, I think it means something more. The disease that afflicts Hawking is very brutal and ugly, but the life and purpose that Stephen and Jane manage to find in spite of it is something of a treasure. Stephen’s survival, much like life itself, is something of a miraculous thing, and the beauty of that is reflected in the stunning cinematography and the way the film captures the passage of time.

The subject matter of the film alone is inherently very interesting, so it would be hard for a film to screw it up, but certainly not impossible. One of those ways would be for a filmmaker to try to over-explain what is always going on in the hearts and minds of the characters. If you know the real life story of Stephen Hawking and his wife Jane, then you know that not everything about their relationship was fairytale material. The film shows us this, and, with the help of strong performances, is able to convey the deep feelings associated with certain thoughts and actions but wisely never tries to fully explain them or rationalize them. The Theory of Everything is, in and of itself, not a theory about the reasons why certain things happened in the life of Stephen Hawking; it is merely an expression of that life, and a fine one indeed. If you haven’t seen this film, then you owe yourself a look. And don’t forget to tune in on Sunday, February 22, to see if it defies all the odds and walks away with the Academy Award for Best Picture!