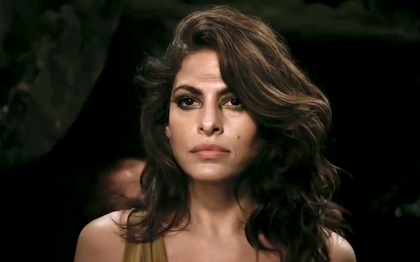 A deranged homeless man licking Eva Mendes’s armpit and then kidnaps her in a King Kong-like fashion. That’s all it took for me to fall in love with this 2012 film by Leos Carax called Holy Motors, which has somehow gotten lost in streaming on Netflix. With that description, I’m sure you’re asking, “What the heck is he talking about?” And rightfully so, because this movie is weird as all hell.

The title is a reference to the company that people like Mr. Oscar work for, and the identical limos they use to drive their employees to their appointments. Holy Motors follows a day in the life of a man named Mr. Oscar, played by the very physical French actor Denis Lavant, as he is driven around in a white limo by a woman named Celine to accomplish different “appointments”, as the characters refer to them. These include being an old woman beggar, a motion caption actor, playing the aforementioned deranged homeless man who kidnaps a model (Mendes), a father, a Chinese gangster, and plenty of other whacky stuff. Throughout his day Mr. Oscar meets fellow employees also on these appointments, and it’s hard to say if nearly everyone he encounters is working for this company or not.

The purpose of these appointments leaves the audience trying to figure out what Mr. Oscar’s "job" is. (Which is also part of the fun.) When thinking about Holy Motors and the scenarios that take place in it, this film actually works well with the world we live in today. We live in this kind of augmented reality these days. We have guerilla and viral marketing helping to engage fans in the world of upcoming films and television shows, people are snatching fame by putting themselves on the internet, reality television and its scripted glory, and the “you gotta see it to believe it” moments of everyday life broadcasted on television and/or the internet. Mr. Oscar seems to be part of a company that wants to fill the lives of everyday people with completely bonkers moments that we would find a lot on websites like YouTube. It’s kind of like reality television without a film crew working on it. Instead, these actors, like Mr. Oscar, have no idea if anybody is filming them or not. They can only hope somebody is. As Mr. Oscar puts it, “I liked it better when I knew I was performing for cameras. The equipment used to be huge; now we have cameras smaller than our heads.” But of course, there is more to it than just that, and I make no claim that even my observation is correct.

A word of warning about this film: if you haven’t picked up on it yet, it isn’t for everybody. It’s a bit slow at times but rewards its patient audience with completely insane situations. A day in the life of this man is the best way to describe it, but at the same time, we have no idea if this is reality, a dream, or something entirely different. The images are striking and like nothing I have ever seen. In fact, I can’t even say, “If you like  ________ then you would like Holy Motors,” because nothing is comparable. But who knows, maybe you know a film similar to Holy Motors. There’s only one way to find out -- by watching Holy Motors on Netflix right now! Seriously, stop reading this and load up this movie immediately!