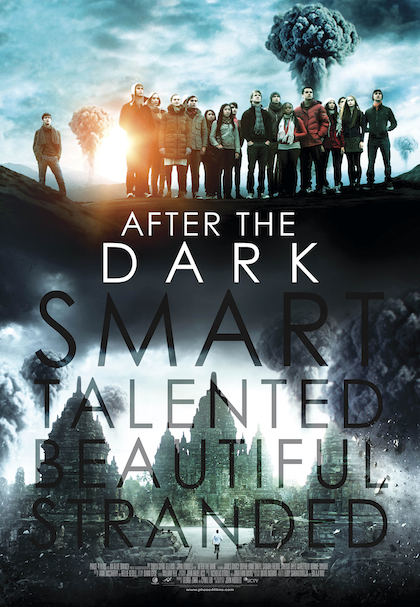 Here’s a question for y’all to mull over: if the Apocalypse was coming, and only a limited number of people could be saved to repopulate the earth, whom would you consider the most “valuable”? The smart ones? The pretty ones? The athletic ones? Would you rather save the cast of Twilight or the cast of “Modern Family”?

While you’re chewing on that one, allow me to pique your interest in a new film coming out from the rookie writer/director John Huddles called After The Dark – not your typical science-fiction film, this one brings up allll sorts of philosophical and moral dilemmas. In it, a college professor proposes hypothetical scenarios to his class of twenty students wherein only ten of them could be saved following a nuclear disaster. It’s an experiment meant to create debate and discussion, but as it creeps onward, it becomes more and more… severe, until it is not a game anymore. Yikes!

The film stars James D’Arcy as the prof and features the likes of Bonnie Wright (Ginny from Harry Potter), Rhys Wakefield (Sanctum), and Maia Mitchell ("The Fosters") as a few of his students. Judging by the trailer, this promises to be quite an intense experience. Check it out for yourself below!

The film will open in limited release on February 7 and nationwide on April 15. Here’s hoping it gains a lot more momentum in the coming weeks!