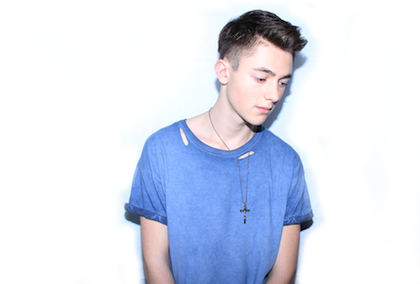 From viral video sensation to bona fide pop star, Greyson Chance is all grown up and back with a new single! You may remember Greyson as the 2010 Internet sensation that captivated the country from their computer screens with his stunning rendition of Lady Gaga’s "Paparazzi". Little did Greyson know when took the stage at a middle school talent show that his cover performance of the Gaga song would earn him YouTube fame, a spot on the "Ellen" show, and a recording deal with her label eleveneleven. 12-year-old Greyson earned tens of millions of followers who quickly fell in love with his 2010 single "Waiting Outside the Lines" and the 2011 album that followed, Hold on ‘Til the Night. Even Young Hollywood couldn't resist this pop cutie! Check out his first-ever interview with us below:

Now, Greyson Chance is back with a brand new single that’s just as mature as he is! Still reminiscent of the ballads that Greyson is known for, "Meridians" is a song whose lyrics, which discuss the transcendence of relationships, are decidedly more adult than his earlier material. Plus, the low-key lullaby quality of this single showcases the way that Greyson’s voice has developed over the years while remaining loyal to the sound that first made him famous and defined his style. "Meridians", which released just last week, is available on iTunes. Listen here and check out the lyric video below!