'It Follows' Reinvigorates the Horror Genre! 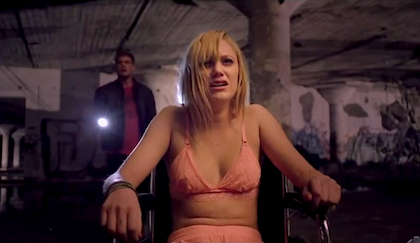 Being a horror film fan is a lot like cheering for the Chicago Cubs or the New York Mets -- the love in your heart remains the same, but you know you’re not going to see much in the way of progress. I’ve said it many times (so one more ain’t gonna kill you) that horror is very much “the-little-genre-that-could”. On the whole, it doesn’t get much respect, but regardless of that, it has shown audiences time and again that real art can be found in the creepy places where things go bump in the night. Case and point, a little film called It Follows has been getting quite a bit of attention from the world of filmdom, and I for one was overjoyed to hear it. Eventually, I saw the film myself, and I can tell you that all the praise is much deserved, and then some.

It Follows tells the story of Jay (Maika Monroe), a 19-year-old girl who has recently begun her first serious relationship with Hugh (Jake Weary). After they sleep together for the first time, Jay awakens to find herself tied up. Apparently, she is not a fan of Fifty Shades of Grey and demands from Hugh an explanation. All Hugh can tell her is that, because he made sweet love to her, he has passed something on to her... and it ain't treatable with Valtrex, if you get my drift. He then shows her what looks to be a corpse or zombie-like figure approaching the building they are in. She’s not a fan of "The Walking Dead" either and begins to panic while demanding more answers. All Hugh can tell her is that It will continue to follow her until she sleeps with someone else, and then "It" will follow that person in turn. If It should somehow kill her, then It will resume following Hugh until it kills him. I hope all of that makes sense, because that’s all of the information we are ever given about what exactly is going on.

Well, now that you’ve got the basic plot, let me prepare you a bit for your eventual viewing of It Follows, because you really should see it, but you might be surprised at what you see. This is a film that favors visual storytelling over scenes of dialogue. You never really get to know the main characters that well, but if you pay attention, you’ll see that the film is giving you some information in regards to their thoughts and feelings. In most films, keeping your main characters at a distance is a no-no, but here it works because the ultimate point of the film is to bring the event to life. It Follows makes the decision to focus on the nightmare itself, and the confidence of that decision is evident, because the movie never feels flimsy or half-realized. This is exactly the kind of film that David Robert Mitchell wanted to make. Some might complain that, because the characters are so distant, you can’t empathize with them, but a road of motivations and emotions isn’t always necessary. This is especially true in It Follows, because at the end of the day, I think you would have to be a little off not to see how being in this situation without any explanation or obvious solutions could be pretty damn horrifying. The film also pays homage to the horror flicks of the '70s/'80s, and it does so in some subtle and clever ways. The score, however, is not quiteso subtle, as the sounds of slasher films from yesteryear rings out in practically every scene.

So, after seeing The Babadook and now It Follows, I can say that my years of faith in this oft-ignored genre are finally paying off once again. Filmmakers are starting to realize that playing to the lowest common denominator is not the only way to please an audience. If you look at It Follows and all of the genre films released last summer (well, almost all), you’ll see that filmmakers are no longer taking the public for granted, and the results have been some pretty damn great films. It Follows is a pretty damn great film too, so don’t miss out on your chance of seeing it on the silver screen.

But first, be sure to check out our chat with star Maika Monroe!