Get Ready for 'Sharknado 3': This Time It's Political! 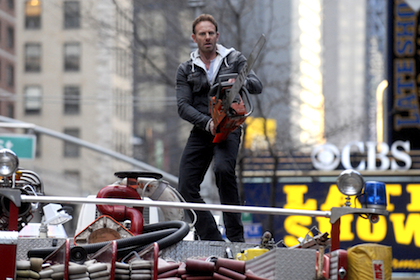 A shark and a Congressman walk into a tornado...

Apparently, two sharknados were not enough for you people, as Syfy recently announced that there will indeed be a Sharknado 3, and this time, it will take place in Washington D.C. The location was decided by an online poll, which clearly shows that Americans have the highest opinion of our Nation's Capital. Rumor has it that Sharknado 3 will have the monsoon of sharks attacking various politicians. That is certainly one way to make a political statement... It would be quite entertaining to see the sharks wreak mayhem on Congress. Maybe they would finally get something done for once! (I’ll see myself out...)

It was inevitable that Syfy would make a third Sharknado. The second film was the most-watched film to ever air on the Syfy channel, and thanks to social media, it became a global hit. There is no doubt that many will go as  a “Sharknado” this Halloween (I would).

Are you excited to see Sharknado 3? Which politicians would you like to see make cameo appearances?

In the meantime, check out our chat with Sharknado stars Ian Ziering and Tara Reid at Comic-Con!