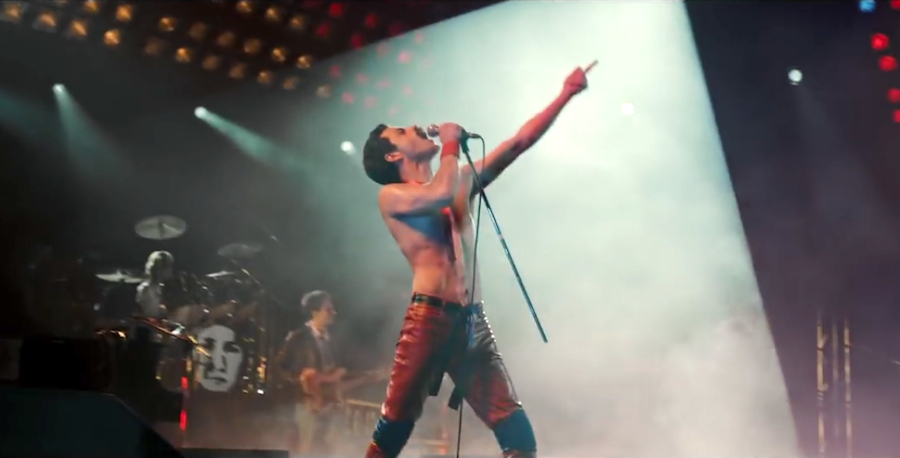 After nearly a decade in development and production hell, Freddie Mercury’s story Bohemian Rhapsody is finally seeing the light of day, and judging by this spectacular trailer, which was just released yesterday, it seems like it will have been well worth the wait!

Emmy-winning actor Rami Malek stars as the iconic Queen frontman, whose flamboyant stage persona belied the shy, sensitive artist away from the spotlight. His songwriting abilities, plus his incredible 3-octave vocal range, are now legendary. If you’ve never sung along in an operatic falsetto and bopped your head to Brian May’s guitar shredding on “Bohemian Rhapsody”… you’re lying. The film will focus on the early years of the band in the late-‘60s/early-‘70s, leading up to their epic Live Aid performance in 1985.

Much like the band itself, this production went through many ups and downs, including 3 different actors in the role of Mercury (Sasha Baron Cohen and Ben Whishaw preceded Malek), complete script re-writes, two different studios backing the film, and director Dexter Fletcher leaving and then re-joining the project when his replacement Bryan Singer was fired. Whew!

Everything happens for a reason, though, and kudos to the surviving bandmembers for sticking to their guns to make sure that this film was exactly what they wanted, and the tribute to Mercury that he deserves. Plus, Freddie, who was of Parsi descent (born Farrokh Bulsara in what is now Tanzania), will be played by an Egyptian-American actor, which, while not 100% the same, is still a lot closer to Mercury’s true ethnicity. Details like that are always appreciated, and Rami is absolutely killing it in this trailer. Though it’s too early for Award Season speculation (especially since I haven’t seen the film yet), I think it’s safe to say that there is some Oscar contention here!

Bohemian Rhapsody will rock out in theatres on November 2.