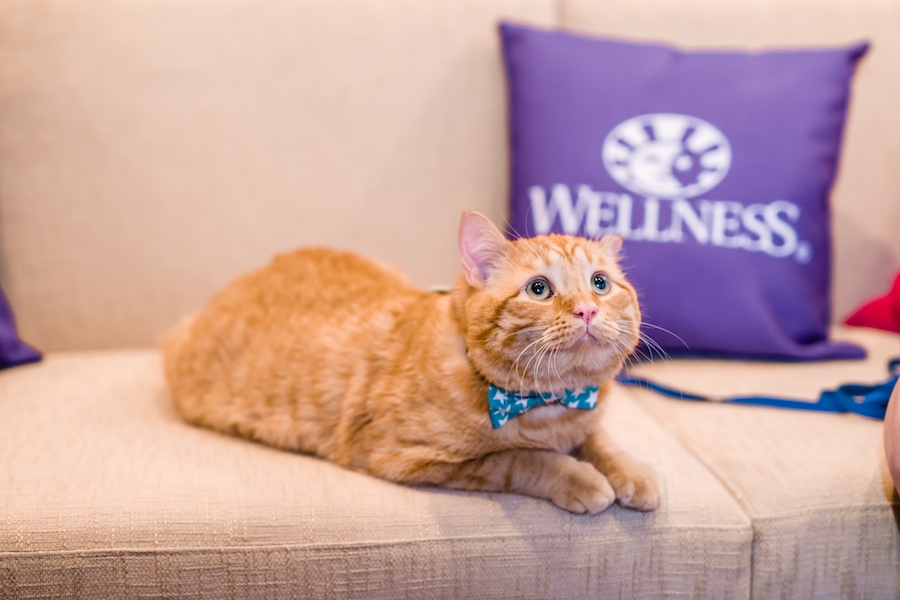 “What type of person would attend a CatCon?”

This is a question that was thrown around frequently over the weekend while I attended the annual CatCon Worldwide in Pasadena, CA. And it’s a question I myself would have asked a year ago, before my life was turned upside-down by a pair of frisky felines…

I have always been a dog person. I had dogs growing up, and I had a dog up until 2-and-a-half years ago, when I had to put her down at age 14. I've historically had a very tenuous relationships to cats; I found them cold and indifferent and not particularly lovable. Though I always told myself that if I ever DID get a cat, it would be a black cat. Because they’re just cool. (And good at scaring away ghosts and stuff…)

Then one day, about a year after my pupper passed, I spotted a gorgeous, sleek black cat prowling the grounds of my apartment building. I started bringing food out for her. And that’s when I discovered her 5 kittens. All black and beautiful just like their mama. Long story short, I ended up rescuing 2 of them. That was last August, and they have been with me ever since. And BOY has it been a learning experience! 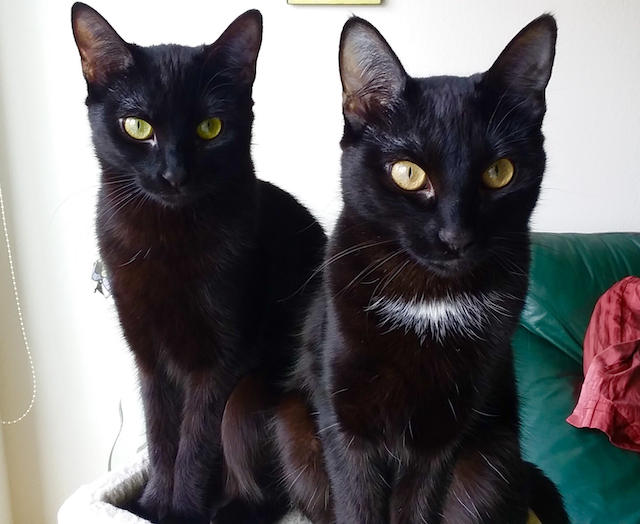 Fast-forward to this past weekend, and the question posed in the opening of this article has at least one answer: “Someone like ME.” Someone who is a very new cat mom, someone who has fallen in love with her precious demon babies, someone who has developed a new respect and appreciation for the feline brethren. I have come to discover that cat owners share a special unspoken camaraderie. I always considered it a kind of cult, but now I realize it’s more of a support group. But a fun one!

Thus what lures grown humans like me to a CatCon. It’s pretty much exactly what you’re imagining – a celebration of all things feline with numerous vendors and cat enthusiasts peddling their wares and swapping stories about their precocious furbabies. Some of the cool vendors and exhibitors I encountered include:

- AquaPurr, an innovative water fountain that connects directly to your faucet and is designed to blend with your décor while allowing your kitty 24/7 access to delicious, moving water. They can be disguised in a flower pot, which would be great for me considering we can’t keep gardenias in the house anymore because the kitties like to get into them.

- KittyVent, for those whose litter boxes happen to be near a window (unlike mine), it’s basically a tube you run from your box to your window to vent stinky odors outdoors.

- CatLadyBox, which is one of those monthly subscription boxes where they mail you a box of cute and sassy kitty merch every month, like T-shirts, kitchenware, plushies, and more.

- Weruva cat food, a family-owned business that makes pet food with real ingredients you can actually make out instead of the usual pureed mush. They gave me a free sample pouch of their chicken & salmon stew, which I shared with my babies the next day and they loved it! Their flavors also include cute names like Stewbacca (chicken, duck, & salmon), Stewlander (duck & salmon), and Name Dat Tuna (tuna pate).

- Treatibles, which, as you might have guessed from the punny name, are edibles for pets. Not, it’s not marijuana, it’s CBD, which is a beneficial substance found in marijuana which gives you all the benefits without the high. Yes, they make this for pets. I got some free samples but have yet to use them; saving them for a “special occasion” [wink]…

- Dorklandia, who makes adorable custom plush kitties. She had two that looked just like my babies (one black with yellow eyes, and one black with green eyes) and I am kicking myself for not purchasing the pair!

- Erica Danger, a high-end pet photographer who takes super cute pics of your cats and her own (including a black foster kitty she photographed sitting on a Ouija Board – perfect!), with whom I had a very lovely conversation. Or rather she very generously listened as I vented about my kitties. Thanks, Erica! 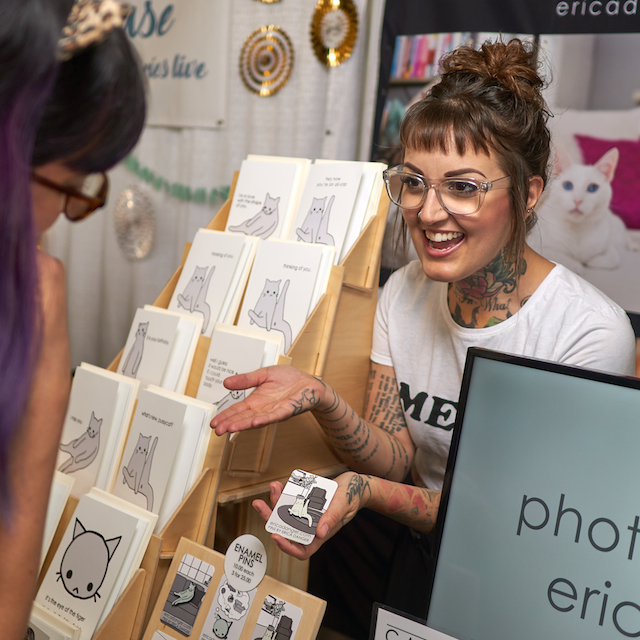 - Apryl Triana, a Phoenix, AZ-based tattoo artist who was on-hand who give patrons some cool “cattoos” based on a flash sheet for the event. I was THIS CLOSE to getting one but she was all booked up for the day by the time I got there. Sigh.

- Pet portraitist Daniella Spires, who can make your kitty look like an Andy Warhol art piece or a Renaissance painting.

- A Kat Von D Beauty bar was set up to give attendees the perfect cat eye. I would have partaken but I had already purrfected it myself that morning.

- I met the lovely ladies who run the Dark Lord Instagram account, one of my newest obsessions (seriously, check it out asap). Sadly, I did not get to meet the little Lord himself.

- Cat Tailer, which is basically a little tracking device you can put on your cat’s collar to let you know where they are at all times by linking it to your smartphone. Helpful for indoor/outdoor kitties but also if you have indoor-only stinkers who love to hide from you.

- Britnee Braun Designs, where I picked up an olive green kitty cardigan and a super cute black-and-white striped pullover.

In another building adjacent to the Convention Center, the Best Friends Animal Society had set up a cat adoption village, which was the only place in the entire Con that I got to see actual kitties. Good News: By the time I made it there, over 80 kittens had already been adopted! Bad News: The majority of kittens that were left were little black ones, like mine. Apparently there is some stupid “stigma” against black cats, and I am NOT here for it. Black cats are the BEST CATS and y’all need to recognize! 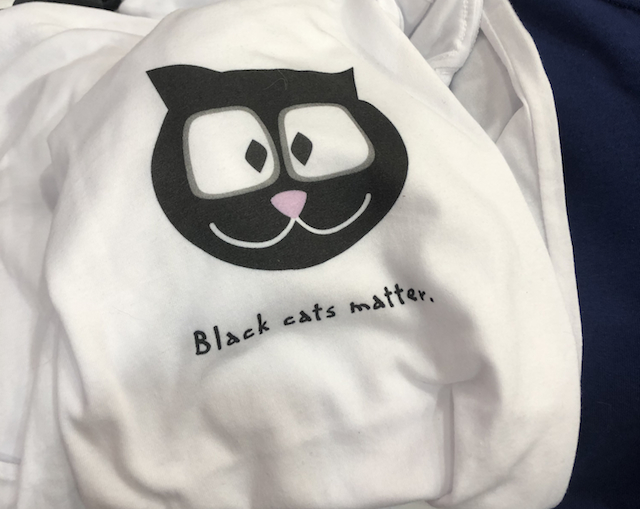 Well, by the end of the Con, a total of 200 cats had been adopted, so here’s hoping that some of those precious babies I saw on Saturday found good homes!

And as a final comment on the question “What type of person would attend a CatCon?”, well, apparently people like Macaulay Culkin, Kat Dennings, Brenda Song, and Seth Green would, because they totally did. 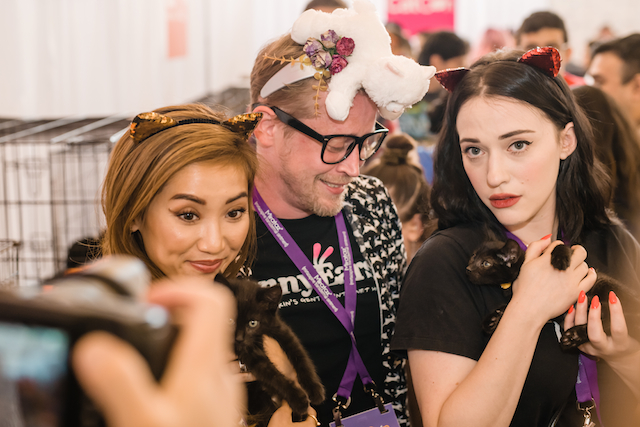 And there you have it. I am now officially a Crazy Cat Lady. It’s my new fate and I am embracing it. 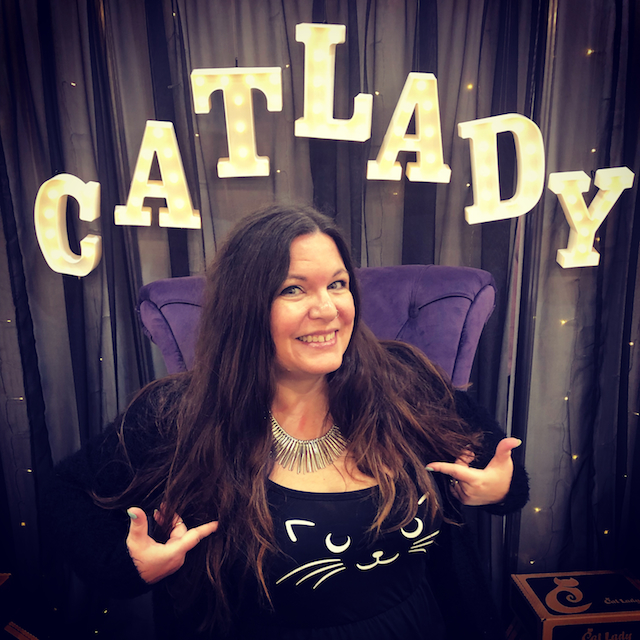