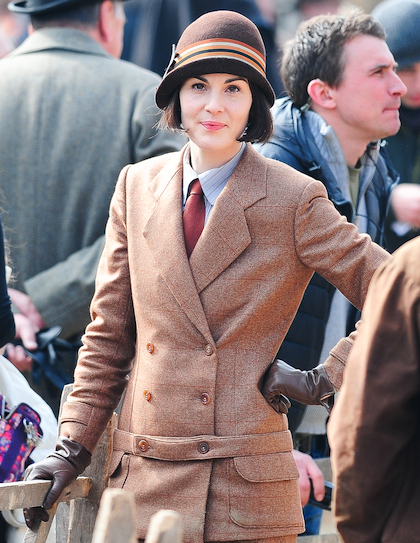 When “Downton Abbey” first premiered, no one expected it to become the cult phenomenon in America that it is today. It’s hard to imagine a time when we didn’t follow the lives of Lady Mary, Mr Carson, Daisy, the Dowager Countess, and the rest of the Crawley household, and it’s even harder to imagine that “Downton Abbey” will soon premiere its sixth and final season. The cast recently made an appearance at 2015 Summer TCA and promised that the show will go out with a bang! Here’s what may (and what may not be) happening to some of our favorite characters in the final season:

The Final Season will end in 1925, so we won’t get to see Downton in financial ruin: The Stock Market Crash, which led to the Great Depression, happened in 1929, so whether or not the Crawleys end up destitute is something we will just never know. Producer Gareth Neame admitted that it would be rather hard to see Lord Grantham as an impoverished man, but I personally think it would be sort of fun considering the fact that he’s a bit of a garbage person (in my opinion). Remember how he has refused to adapt to the 20th century? In every episode?

The characters will continue to deal with new technology: I love when the characters receive something like a telephone or radio and completely have a meltdown over it. It’s always great fun. Considering the fact that the show will be taking place in the mid-20s, my guess is that they may be dealing with new (and fancier) cars, instant cameras, and even possibly an automatic washer (the first one appeared in 1923). It will be hilarious to watch Mr. Carson fiddle with an automatic washer (how I love him). Apparently a refrigerator will also make an appearance this season, but let’s hope that’s not the only new technology.

Some of the household staff may get fired: After Lord Grantham visits a friend who has had to sell his estate, he decides to pressure Mr. Carson to let go of some of the staff (see? I told you he’s the worst). Well, this is realistic and historically correct; it’s sad to think that one of the beloved members of the household will be sent on their way. It just better not be Daisy. She's just too amazing to be let go.

Even though this is the end, there could be a movie! It seems that the creator of “Downton Abbey”, Julian Fellowes, is taking a leaf from the creators of “Community” -- he wants “Downton Abbey” to have six seasons and a movie! Fellowes and Neale have admitted that, as of right now, the movie is in the “speculation stage” (there isn’t even a script), but Fellowes has said that he does have a story in mind. Let’s make it happen! #SixseasonsandamovieDowntonstyle

“Downton Abbey” will return to PBS on January 3rd! Will you be tuning in?