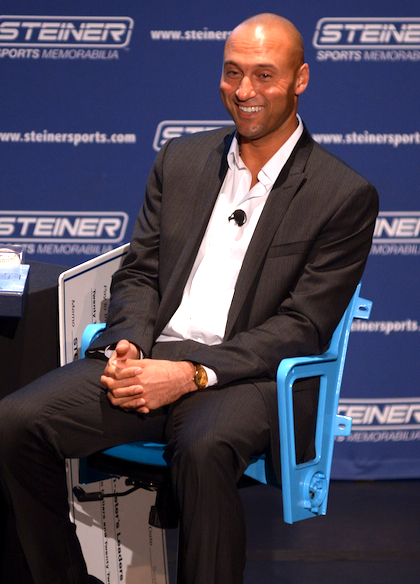 Even though I’m a Bay Area girl and will always root for the San Francisco Giants, I can’t deny how incredibly talented Derek Jeter is and how sad it is to see him retire.

Baseball star “The Captain” AKA Derek Jeter, played his final home game at Yankee Stadium last night and made a powerful exit for all of his fans to watch.

Not only did Jeter help his team tie up the game, but he was the reason for the WIN. With one out in the bottom of the 9th, Jeter stroked the winning hit, and the 6-5 win over the Baltimore Orioles was his 1,627th regular season victory as a Yankee!

What an amazing way to end a career, huh?!

Jeter has been in this business for years (more than 20, to be exact), so naturally he would have a huge list of accomplishments! But I’ve decided to focus on 5 major ones that really highlight his incredible career and define him as a baseball legend!

1. He was Rookie of the Year at the start of his career

Jeter was given this award because of his excellence in baseball. The Jackie Robinson Award is given to players who have the best rookie season; pitching, hitting, and fielding. Jeter went on to prove that his hitting and fielding skills were top-notch.

2. He was awarded 3 MAJOR awards in one year

He was appointed captain in 2003 because of his ability to exhibit excellent play, class, leadership, and winning. He was the 11th player named captain in franchise history and helped the Yankees win 5 World Series Championships.

Exceeding Babe Ruth’s number of hits, Jeter became the 23rd member of the 3,000 hits club, the 4th-youngest player to reach the milestone, and the first to get #3,000 with the Yankees. He recorded five hits on that historic afternoon -- the third 5-hit game of his career.

5. He made history in a Trio

Jeter made history early a few games into the 2010 season when, on April 6, he, Jorge Posada, and Mariano Rivera became the first trio of teammates in MLB, NFL, NBA, and NHL history to have played together in 16 seasons. He then made the AL All-Star team for the 5th consecutive season and 11th time in his career.

So, sports enthusiasts and baseball fans alike, if that shortened list of accomplishments doesn’t impress you, then I don’t know what will! The name Derek Jeter, along with his achievements, will remain in baseball history forever!