'Deadpool' Movie is Officially a Go! 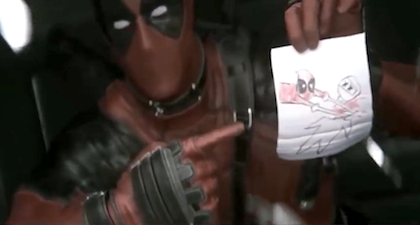 For years, comic book film enthusiasts have held out hope that, one glorious day, the Deadpool movie would finally get a release date. Well, that long hoped-for day has finally come, as Fox has announced that Deadpool will hit theaters on February 12, 2016! This means that Ryan Reynolds will finally come out of cinematic obscurity and proudly take his place as a smart-ass superhero.

For those who don’t know, Deadpool is a masked smart-mouth whose powers include the ability to heal himself as well as a magic bag that is frequently mocked (hence where is razor-sharp wit comes from; he always has to defend his bag!). Deadpool was first introduced into the cinematic world of X-Men when Reynolds played Deadpool in 2009’s X-Men Origins: Wolverine -- although Deadpool has been a mainstay in the Marvel comic universe for some time now.

A while back, some test footage featuring Reynolds as Deadpool surfaced, and the typical debate by internet geeks (of whom Comic Book Guy from “The Simpsons” is based on) of whether or not Reynolds brought justice to Deadpool raged on, but I have to say that I think he does. Surprisingly, Reynolds brings the right amount of smart-ass to Deadpool; I am not a huge fan of Reynolds, but I am a huge fan of Deadpool, and Reynolds's signature brand of humor compliments the character well. Go ahead and judge for yourself:

While there is no official word yet on whether or not Reynolds will actually play Deadpool, it can be safely assumed that he will. Interestingly, Reynolds recently talked about the test footage and his amazement over the internet’s reaction to it. Whether it’s a viral cat video or test footage of a superhero movie, you can count on the internet to have a freak out over it.

Are you excited to see the new Deadpool film? Do you want to see Reynolds in the role?