The 5 Biggest Moments from the First Half of "Awkward" Season 4! 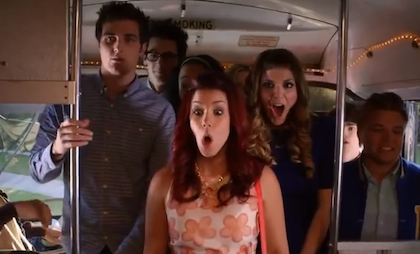 If you're like me, you have fallen in love with all of the characters on "Awkward" and just want the best for them! The mid-season premiere is set to air on MTV tonight at 10:30pm, and I’m beyond excited! I feel like I’ve been waiting FOREVER, and I am pretty much set to continue on with Season 4 because I’ve been obsessing over all of the little details. However, I don’t blame you if things get a little hazy while you try to remember everything that happened. Don’t worry guys, I got your back. Read below to find out which 5 crazy things happened during the first half of Season 4!

Sorry, Jenna, it’s not always about you! The second episode of Season 4 starts with Jenna and friends filming a music video for Jake’s new song in Matty’s backyard. While Jenna is lost in thought (as usual) during a filming break, a weird flying object hits her face, giving her a bloody nose and a chipped tooth. Perfect Matty (swoon) comes to her rescue and sits her down on his couch while he looks a first aid kit. While rummaging around in his garage, he finds a piece of paper, which we later find out is some sort of documentation of his adoption. We’re left with his puppy dog eyes and sad little face. He returns to Jenna and apologizes for not being able to find the kit. She tells him it’s okay and they move on. A few days later at school, Jenna is feeling unsure of her feelings for Matty and starts to think his change of attitude is about her when really Matty is focusing on how his entire life has been a lie. She approaches him and yells at him, refusing to be his “shameful secret” once again. He calmly tries to assure Jenna that it’s not about her, yet she’s too busy yappin’ his ear off that she doesn’t hear him. He gets frustrated and actually tells her it’s not all about her as he storms away. Aww, poor Matty! We still love you!

Oh Jenna. How many dudes are you going to date on this show?! I’m still Team Matty… get with it, already. Anyways, it’s time for Jenna and Tamara to apply for college, so they take a tour of the SCU campus. Tamara finds her destined sorority sister and parties with her while Jenna bonds with college boy Luke. Luke is a serious, yet charming bookworm that steals Jenna’s attention immediately. Jenna, trying to be a better version of herself, starts to believe that Matty is a zero and Luke is a hero. Jenna’s parents are smitten with Luke as well and invite him to her high school’s pageant, where she lends a helping hand. Matty goes on stage and makes a total scene about his adoption while Jenna runs outside seeing that Luke’s seat is suddenly empty. In fear thinking that Luke can’t handle “this highschool girl”, she’s surprised to see Luke pull up with her favorite coffee and flowers. They kiss and it’s cute, I guess. UNTIL the camera pans to Matty as he watches the entire thing. My heart breaks as he walks away. Matty, don’t go!

3. Jake and Tamara break up

So, I wasn’t exactly surprised when this happened. I mean, Jake and Tamara weren’t the perfect match to begin with. Tamara is completely lovable and you want her to be your best friend. However, Jake disagrees! He becomes sick of her bossy, condescending attitude and dumps her on campus. It all started with Jake writing a song that Tamara didn’t like. Rather than be a good girlfriend and give constructive criticism, she tells Jenna that she has no "pokerface" when it comes to his music and avoids him to steer clear of possibly hurting his feelings. One night, Tamara listens to the song and has a revelation that it’s actually pretty catchy. She gets so excited that she buys Jake a pair of matching headphones. While she sits down in his car, she, thinking it’s a compliment, says something along the lines of “you actually CAN write a good song!” Jake gets pissed, sees it as an insult, and drives them straight into Splitsville. Her dreams of them being PHHSPC (Palos Hills High School Power Couple) are ruined. Oh, and Tamara is so set on getting Jake back that she catfishes him and pretends to be a hottie from Australia. (He finds out later on in the season.)

4. Jenna sets up Matty and Eva

Jenna, feeling content with her new college boyfriend, tries to prove to Tamara that she really wants to see Matty date someone else -- only if it makes him happy. Eva, a tall and mysterious blonde, enters Palos Hills High and shakes everything up. She’s apparently traveled all over the world, has had crazy adventures you’d only hear about in "Gossip Girl", and is completely open about sexuality and how to find pure pleasure. Jenna thinks Eva will be a great match for Matty since he’s been so down in the dumps lately. Throughout the first half of the season, Jenna goes on dates with Matty and Eva and starts to realize that she still might have feelings for Matty. Eva confronts Jenna and tries to make sure that she gives them her full blessing. Of course, awkward Jenna doesn’t stand up for herself and they continue to date. Matty starts to fall for Eva, and Sadie makes it well-known that she is not Team Eva (neither am I!). Viewers begin to see little things that hint to Eva’s possibly fake persona. Which leads me to the last major storyline…

5. Eva’s real name is Amber and she’s a pregnant sociopath

The Awkward crew (including Luke) gears up for their senior ski trip, which I just knew would be full of drama. It starts out on the bus with Matty confronting Sadie about something Eva revealed to him. Eva told Matty that Sadie has feelings for him (so not true), and it doesn’t sit well with Sadie. Sadie runs towards Eva and pulls on her hair, which, of course, gets her kicked out of the ski trip. With Sadie left behind, Eva has countless perfect opportunities to make Jenna seem like a jealous ex-girlfriend. Meanwhile, Sadie is focusing on revenge and makes a trip to Eva’s house, where she makes her awful discovery. The woman who opens the door is NOT the Eva we all know and hate. It's the real Eva Mansfield, and the “Eva” we know all season has been running up her credit cards (cue the Psycho music).

Back at the ski trip, Eva stirs up any drama she can, including purposely running into Jenna with hot chocolate so Matty would tell Jenna to stay away. While at “Eva’s” house, Sadie finds out her real name is Amber and that she lives in a shammy place -- something completely opposite of the glamorous life that Eva would always describe. Her grandma tells Sadie that Eva/Amber doesn’t have any friends (uh oh). Intrigued, Sadie sneaks into the house to find Eva/Amber’s psycho wall -- a shrine to Matty and targets on Jenna and Sadie’s heads. Sadie calls Matty’s phone and spills the beans before she realizes who’s on the other line. Of course, it’s Eva. Or, should I say, Amber. Panicking, Eva/Amber realizes that her cover has been blown and goes to drastic measures! Sadie calls Jenna and reveals that Eva/Amber had stabbed a kid in the face with a pencil when she was 9. They have to find Matty and tell him immediately! During her desperate attempts to find Matty, Jenna realizes she was ignoring Luke. However, she’s far too late and sees that he packed his bags and left. Eva/Amber then takes Matty to an isolated cabin so they can be alone, and knows she only has so much time before Jenna and Sadie find them. She tells Matty she’s pregnant just moments before they arrive (no!!!). The four end up stuck in the cabin during a major snowstorm, and Jenna gets Matty alone while looking for candles. The cabin owners come home and clearly don’t know who Eva/Amber is, even though she told Matty they were her friends. Matty discovers that Eva/Amber is a fake, yet stays by her side because of the pregnancy. So, the mid-season finale ends with me screaming at the TV screen while Matty chooses Eva/Amber over the truth-telling Jenna and Sadie!

Guys, if that doesn’t get you excited about the mid-season premiere, then I don’t know what will. The premiere is rumored to start immediately after the snow trip, and I’m dying to see where the storylines will lead! Don’t forget to watch on MTV tonight! Team Jenna & Matty!

In the meantime, be sure to check out our set visit with the cast from this summer: