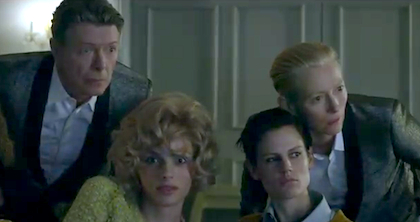 WHOA! Just call me Kreskin!
Not even a full month ago, I wrote an article about 8 biopics that Hollywood should make. One of the wackier suggestions involved a movie about the androgynous David Bowie in which he would be portrayed by the androgynous Tilda Swinton (to be honest, the original idea belongs to writer Sarah Osman – credit where it’s due!). I figure, hey, if Cate Blanchett can play Bob Dylan (and get nominated for an Oscar for it!), then this wouldn’t be as much as a stretch, right?
Okay, so, GET THIS. Only a couple days ago, Bowie, who recently came out of retirement to drop some new tunes and a new album, released a music video for his latest single, “The Stars (Are Out Tonight)”, in which he co-stars with… Tilda Swinton!!!
In this surreal, short film-esque clip, the two bookends play a stylish couple who appear to be haunted by… younger versions of themselves? Stalkers? Honestly, I’m not sure what’s happening here, but there are a lot of guys who look like girls, and girls who look like guys. A celebration of androgyny, all culminating in Bowie and Swinton eventually dressed exactly alike! YES!
Hollywood, let this be Tilda’s official audition for the David Bowie biopic I pitched last month!
(Image via David Bowie/YouTube)
- Katie Marzullo, YH Staff Editor
[email protected]