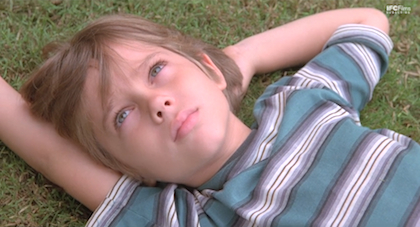 At the risk of sounding like a local news movie critic, Boyhood is like sampling a very fine wine. Initially for me, that is; there was some bitterness at the start, but soon the complexity and true craftsmanship began to weigh in heavily on me, and I was finally able to recognize the truly great thing that I was experiencing. I should mention that I’m talking about the movie at this point, and not a fine wine. Boyhood is one of 8 movies up for the grand prize at this year’s Academy Awards ceremony, and I am here to tell you that the buzz surrounding this flick is truly warranted.

Boyhood tells the story of a six-year-old boy named Mason who spends the next 12 years changing homes and family situations with his single mother (Patricia Arquette) as she tries to figure out the best kind of life for him and his sister. The film is a series of moments throughout Mason's life as he receives worldly knowledge from his occasionally absent father (Ethan Hawke) and harsh realties from a series of stepfathers who try and fail to provide a stable life for Mason and his family. Adolescent mischievousness and profound questions about life in general bookend what is truly an exceptionally-made and daring film about a young boy who travels down the road of life searching for his purpose in the grand scheme of things.

I’ll be perfectly honest with you when I say that, about 30 or so minutes in to the film, I was starting to feel a little wary. When you become accustomed to a director and the way he works, it can be a bit jarring when they decide to do something a little outside their wheelhouse. In the end, though, that’s not what Richard Linklater was doing with this film, as it is still the kind of exploratory piece about humanity that we have come to love from him. I guess I was just taken aback by the initial lack of that tried and true Linklater dialogue that’s made so many of his past movies truly memorable. What I had to remind myself was that our core character is just a kid through more than half the movie and has not yet gained anything remotely resembling a worldly perspective. He’s a boy who is absorbing everything around him and trying to make sense of it, like all children do. It’s these initial scenes that give you the clues and hints as to why Mason grows up to be the introspective young man that you see towards the last third of the movie.

There is a point in the film where the teenaged version of Mason asks his father what it all means. It’s of course silly to think that Mason’s father would have the answer, and sure enough Mason Sr. reveals that everyone on earth has asked that question and nobody has come any closer to answering it. All you can do in the end is figure out what it all means to you, and through that knowledge try to have a meaningful and happy life. Mason has every right to be hung up on this difficult question, as he has spent most of his life in the company of adult figures (with the exception of his irresponsible father) who are either miserable or too occupied with work and other things to truly appreciate the good things in life. Mason doesn’t want that for himself, and so as he gets older, he somewhat rebels from normality because he has yet to see a standard way of living pay off with any true kind of happiness.

Richard Linklater has always excelled in showing his audiences how something as simple as a connection between two people, romantic or not, can be more cinematic than all the overblown action and melodrama that other films might throw at you. “All the world is a stage and all the men and women merely actors.” The key thing to glean from that Shakespearean quote, and I truly believe that Mr. Linklater has, is that not all the men and women on life’s stage get to be kings and queens. But that does not mean there is no drama or importance within the lives of the simple folk. Boyhood is just a story about a kid growing up. The conflicts in his life are the kind that we are either personally familiar with or have heard about time and time again. It doesn’t sound very exciting on paper, but in the hands of a genius like Linklater, and with the help of his terrific cast, it is in fact the kind of cinematic achievement that most filmmakers can only dream about creating, and the kind of film that myself and audiences around the globe are lucky to have.