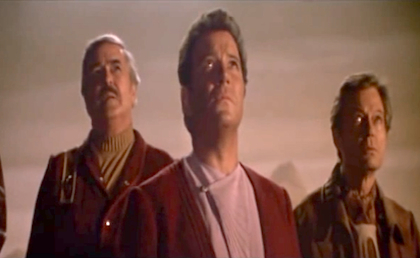 On Friday, February 27, the great Leonard Nimoy passed away, and I personally cannot think of a better way to pay tribute to him than by discussing his role in further progressing the character that millions of people across the world came to love, Mr. Spock. Nimoy had an incredibly deep understanding of his character’s worth and one that certainly did not diminish as the years went by. He was an acclaimed actor as well as an acclaimed human being, and he will be missed by many. And it just so happens that his feature-length directorial debut happens to be my favorite of the Star Trek series.

I do so enjoy the original Star Trek movies. In fact, I’ve always looked at the whole “only the even-numbered films are good” mantra as kind of... well, odd. The grandaddy of all the Star Trek movies, and one of the greatest sci-fi movies of all time, is, of course, Star Trek 2: The Wrath of Khan. The bar was raised to such a ridiculous height with that film that of course any sequel was bound to be dogged by some pretty unfair expectations. Did people honestly just want them to make Star Trek 2 all over again? Well, they didn’t and instead we got my personal favorite film out of the entire series: Star Trek III: The Search for Spock.

I honestly do not know what people have against this movie. I’ve heard some folks say that the story is really weird and that’s what takes film down a few notches. Well... weird for a movie that takes place in outer space and features aliens, that is. For those of you unfamiliar with this flick, The Search for Spock picks up immediately where Wrath of Khan left off. Spock is dead, and the crew of The Enterprise heads home for some much-needed shore leave and to wait for their beloved ship to be repaired. In the meantime, Doctor McCoy begins to suddenly speak as if he was possessed with the spirit of Spock and his fellow crew members fear that their friend has gone insane. Kirk then finds out from Sarek (Spock’s father) that Spock’s consciousness was transferred into McCoy’s mind so that it could be returned to the planet Vulcan for proper funeral rites. These funeral rites must also include Spock’s body, which was laid to rest on the newly-formed and forbidden planet called Genesis. In order to honor his friend, Kirk and his shipmates break Doctor McCoy out of the hospital where he is being kept, and proceed to steal the Enterprise so they may travel to Genesis to retrieve Spock’s body. Things are further complicated when they discover that Genesis has somehow rejuvenated Spock’s body and there is now the chance that Spock may live, as long as they are able to reunite his body with his consciousness. Oh, and the film also features Christopher Lloyd as a Klingon out to destroy Kirk. Great Scott(ie)!

Hmmm... okay, the story is a little weird when you come to think about it. But is it any weirder than a plot about 100-year-old genetically-modified humans who use ear worms to enslave the minds of their enemies in order to steal a torpedo that can create life from thin air? Again, I just think that a ridiculous amount of pressure was placed on the third one to live up to its predecessor, and when people didn’t get the same kind of movie, they simply balked at it. It would take a radically different change in tone and style with the 4th one to get fans back on track.

But getting back to Star Trek III... I honestly think that this film actually contains many of the emotional qualities and ideals from the 2nd one. Captain Kirk has always been a man who followed orders. The whole idea of Kirk being a rebel really started with this film. I know they talk about him fixing a test back when he was a kid in school, but up until this point in the film series, he has always been a by-the-book kind of guy. What changes in this film is that Kirk is a man who just lost his best friend, and in the end, he is willing to sacrifice his ship and career if it means honoring him properly. Sacrifice was a major theme towards the end of the second movie, if you recall, and The Search for Spock does what any good sequel should do, and that is to expand on the ideas from it’s predecessor.

I really implore you to watch the clip below. They don’t make movies like this anymore. There’s no explosions or chases or anything mind-blowing happening. But the scene is filled with tension and excitement because the groundwork has been laid so that the consequences and the feelings of the characters drive the scene as opposed to the action itself. Oh, and can we please retroactively give James Horner an Oscar for his work on this film? I mean, that score is simply incredible.

“Kirk, if you do this, you’ll never sit in the Captain’s Chair again.” And yet Kirk has never been more at home in that chair during this film. If you’ll recall, the first two Star Trek films dealt with Kirk’s dedication to Starfleet and his fear that his usefulness was starting to wear out. The idea of Kirk throwing away his career in order to do the right thing by a man who is practically his brother is both a radical departure from his former way of thinking and the next logical step in the evolution of his character. Look, all I’m trying to say is that I’m right about this movie and you’re wrong. No, that’s not true, and I apologize if it sounds that way. What I’m really trying to get across is that this movie is a lot more layered and well put together than people give it credit for. I think it’s damaged rep is simply a knee-jerk reaction that people have because they’ve lived with it for so long, and it’s easier to just go with what you know, as opposed to really looking at the film and finding new ways to appreciate it. I recognize that Star Trek III: The Search for Spock might not technically be as good as The Wrath of Khan, but it’s still my favorite of the series because it takes the characters that I’ve grown to love over the years and sends them in new and incredibly compelling directions. If any piece of cinema deserves a second chance, then believe me when I say that Star Trek III is right up there with the most deserving ones.