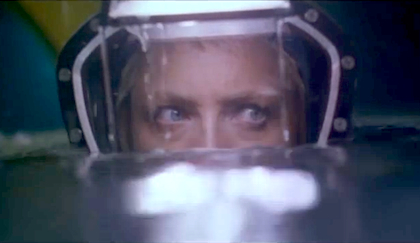 A few weeks ago I was watching Event Horizon when it suddenly occurred to me that the film Sphere tends to go a tad bit unappreciated as far as sci-fi thrillers go. I know that’s a strange way to start things off, but if you’ve seen both of these movies, then you’ll know that both stories are thematically connected to some extent. The reason I chose to write about Sphere and not Event Horizon is that, at the end of the day, I think Sphere had loftier goals. I’m not saying that those goals were necessarily reached, but an effort was notably made and good intentions abound in regards to the plot.

Wow, that trailer is really keeping its cards to its chest. We didn’t even get to see the damn Sphere in question. Well, for those of you unfamiliar with this film, Sphere is the story of a group of scientists who travel down to the deepest depths of the ocean to explore a large spaceship that was recently discovered. Once the scientists enter the spacecraft, they discover some alarming things. The first is that the ship in question is American and appears to have time traveled from the future and crash-landed all the way back in the 1700s. The other is the discovery of a giant golden sphere in one of the ship’s storage bays which can draw people inside of it at any given time. Around the same time of this discovery, the crew begin to get messages from a lifeform named Jerry who may or may not be a survivor of the doomed spaceship. During their encounters with Jerry, strange things begin to happen as creatures and other horrors begin to appear out of nowhere with no explanation. Is it Jerry doing this, or is it the Sphere itself that now threatens to keep our heros from every reaching the surface again?

As far as the complaints towards the film are concerned, I get them for the most part. I really do. I just personally think that the term “bad movie” gets thrown around a lot and we need to be a bit more specific. Is Sphere a bad movie? I don’t believe that it is, and yet I can’t really say that it’s a great movie either. I think we have to file this one under "guilty pleasure" because, at the end of the day, despite its flaws, it’s still a very watchable movie. As far as the film’s positive points -- well, you have a stellar cast consisting of Dustin Hoffman, Samuel L. Jackson, Sharon Stone, and Liev Schreiber, and that is not something to be taken lightly either. Beyond the great cast, you have a very interesting atmosphere which runs the gamut from dark and foreboding to wonderful and intense. Now, all of that stuff I mention is all well and good, but the most interesting thing about the film is both its greatest weakness and one of its greatest strengths...

Hardly anybody in this whole damn film reacts to anything like they’re supposed to. Seriously, sit back and watch the film and you will find yourself uttering “huh” quite a few times as you get towards the middle of the film. When something catastrophic is happening, then a person’s reaction might be minute. If something minor is happening, then a person’s reaction might be filled with great emotion. Again, this happens a lot to the point where it’s almost kind of humorous. So, why is this oddity a point in the film’s favor? Well, the unusual emotions of our cast of characters actually helps to build the unsettling atmosphere that will eventually envelop the entire film. Trying to keep track of what everyone is supposed to be thinking and feeling creates a sort of disorienting effect that puts the audience in the shoes of these people who have left their world in order to embark on this strange and frightening journey. Unfortunately, while the film gains an atmosphere, it does somewhat loose the emotional connection that should be developing between the characters and the audience because you’re not really sure what the hell to think about anybody.

According to some online trivia, Dustin Hoffman stated that he was a little disappointed in the film because there were things that needed to be ironed out, but there was no time to do so, and the film was released as-is. I agree that there are some thin areas that could’ve done with some more meat. For instance (SPOILERS), if the Sphere gives you the power to make your thoughts real, then why did it only work in regards to everyone’s nasty subconscious? But, as I mentioned before, the film is ultimately a guilty pleasure because, when it does work, it manages to overshadow some of it’s shortcomings. I may be in the minority here, but I find Sphere to be a highly enjoyable film and easily deserving of a second chance.