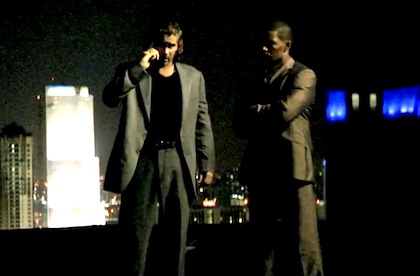 Hey guys, did you know that today is Miami Vice Celebration Day? It's true! So what better excuse is there to examine one the lesser revered films of the great and wonderful Michael Mann, 2006's Miami Vice? Mann is one of the greatest directors currently working today, though you may not know him because he has yet to direct an Iron Man movie or a Nicholas Spark adaptation. Nevertheless, I must ask you to trust me when I tell you that, with films like Heat, The Insider, and Manhunter under his belt, he is a cinematic force to be reckoned with. And for my money, you can add Miami Vice to that list of achievements as well.

Colin Farrell stars as Sonny Miami and Jamie Foxx stars as Ricardo Vice, and together they are Miami Vice. Okay, that is a total lie, but for half a second, you thought it was true, didn’t you? In reality, the film centers on two agents of the Miami Police Department, Sonny Crocket and Ricardo Tubbs, as they become embroiled in an undercover operation meant to take down an international smuggling ring. During the assignment, Crocket becomes enamored with Isabella, a high-ranking member of the cartel played by Li Gong. As the assignment becomes more and more dangerous, threatening the lives of those closest to Tubbs, Crocket must reconcile the fact that completing his assignment will almost surely destroy any chance he has at a life with Isabella.

Well, now that I have completed the boring task of synopsizing the movie, let's get down to the nitty-gritty as you young'uns like to say. I for one enjoy this movie quite a bit, but if you take a gander at the 47% approval rating on rottentomatoes.com, you’ll see that some of the film critics that exist on this Pale Blue Dot disagree with me wholeheartedly. And, interestingly enough, many of the top critics who did give it a positive review still criticize the movie for it’s bare-bones story, or lack thereof. Michael Mann is lauded for his digital camera work and well-choreographed action, as well as having the guts to make the film adaptation of his own television series have almost nothing in common with it’s source material. (Viewer discretion is advised with the below clip...)

Well, there’s a lot in that above paragraph that I agree and disagree with. They say that the film bares no resemblance to it’s '80s television counterpart, but other than the color palette and tone of the film, I think that they are wrong. Crockett and Tubbs are officers of the Miami Police Department, and yet what do we see them doing? Flying planes, driving around in hugely expensive cars, living in lavish apartments that must cost hundreds of thousands of dollars, and piloting go-fast boats at the mere drop of a hat. So, either Crockett and Tubbs are on the take and should be relieved of duty immediately, or Michael Mann is still presenting you with a highly-stylized and fictionalized version of the lives of two Miami cops. It’s just that he’s muted all that jazz in order to pay closer attention to the relationships and emotions of our lead characters.

The film is ultimately about two people caught up in very different but very dangerous lifestyles. Crocket and Isabella are very good at what they do respectively and they pretty much know that it is what they are destined to do for the rest of their lives. And yet, even the smallest fraction of a chance to leave everything behind and do something else with their lives is so attractive that they simply cannot help themselves. One could almost say that they are two dreamers in a nightmarish world, but they are so grounded in the reality of their situations that their so-called dreams merely exist in a glance out the window towards the open sea or a brief look at a group of children playing. Michael Mann is telling us many stories throughout the runtime of this film, but he is doing it with camera movements and nuanced performances, which are apt to get lost in this day and age of “Exposition on Parade”. With Miami Vice, Mann has given the world a solemn and thoughtful crime drama that is still a well-constructed piece of entertainment. Mann is a showman of the finest quality, and he never wants his audiences to be bored, but he is not willing to play to the lowest common denominator in order to keep his viewers entertained. Miami Vice is a film that should be recognized as truly great and one that can stand proudly by the best of Michael Mann’s filmography.