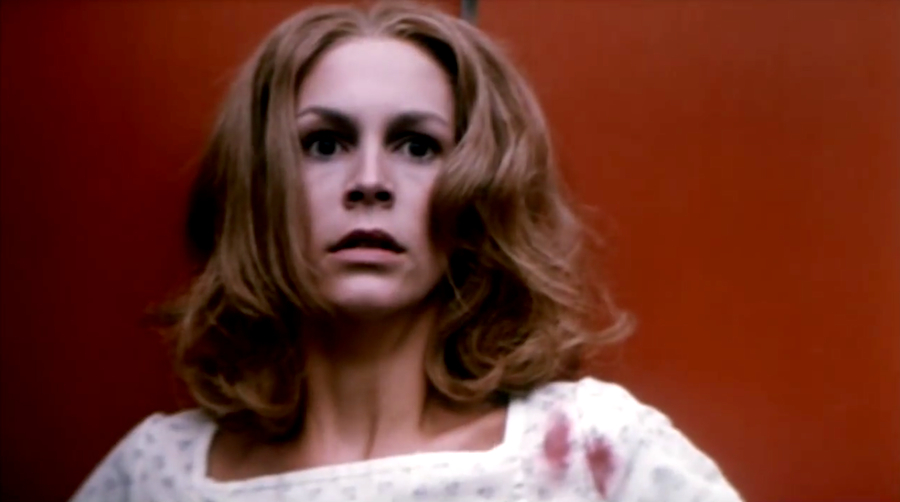 The leaves are falling, kids are screaming from the endless cycle of sugar rushes and subsequent hangovers, lawns become inviting or terrifying, and everyone has the sudden urge to watch horror movies. Being a year-round horror movie fan myself, there is one series that I generally reserve for the Halloween season, and that is, of course, Halloween.

Today, however, I’m not here to talk to about how great the enduring John Carpenter classic is but how its direct follow-up Halloween II deserves some recognition as well. Despite it’s negative critical reaction, it has garnered some love from hardcore fans, and casual viewers of horror movies even know a certain plot twist without having seen any of them and assume it’s part of the first one. So let’s check out Halloween II:

I recently watched Halloween and Halloween II as part of a personal double feature. While I don’t know how many times I’ve seen Halloween, Halloween II is one I haven’t seen since before I was even in high school. I caught it as a pup on Encore, the sister channel of Starz where you can currently watch it right now, and I thought it was awesome. Released three years after the original, it picks up directly after the events of the first, thus taking place on the same Halloween night in 1978. The film upped the stakes quite a bit by following our Final Girl from the last film, Laurie Strode (Jamie Lee Curtis), as she is rushed to the hospital after her traumatizing experience with the boogieman himself, Michael Myers. Most of the film's gory events take place in the hospital as Myers terrorizes Strode and takes out multiple members of the hospital staff, some of which are incredibly horny because this is a horror movie.

What struck me as a kid, and still does today, is the beginning itself. After a recap of the final confrontation from the first film between Myers and his psychiatrist Dr Sam Loomis (Donald Pleasence), we get a peek of where Myers scurried off to almost entirely shot from his point of view. Something I always appreciated about the first film is how ghost-like the camera movements are at times, and Halloween II just might top it in the beginning for sure. Whether it’s a POV or just showing us what’s going on, there are often times where the camera gives us a feeling like we’re floating through the scene. I never heard Sam Raimi really speak of Halloween as an influence for Evil Dead or any of his later work, but after watching this, it’s quite obvious this style had an effect on him (although Halloween II was released around the time as Evil Dead). Anyway, Myers hides from the cops, gets a knife, starts his blood fest on schedule with the first one, and then we see what’s up with Loomis and Strode.

Like I told you, Strode is taking off to the hospital and around now is where I start to notice the budget of the film. If you don’t know, Halloween had a miniscule indie budget, even for its time, and turned over a huge profit, so after getting noticed by studios, producers/writers Carpenter and Debra Hill were able to get some of those big Hollywood buck$ from Universal for Halloween II. Everything is grander in scope -- there are cop cars and ambulances everywhere, they get people from the original back and crowds swarm the crime scene and throw rocks at the old Myers’ house as they would in real life. After watching the first one, it becomes apparent how simple that film was and how small the cast was. Unfortunately, bigger budget doesn’t always make for a better film. Something feels like it’s lacking at this point. It’s still fun, especially with how bat-crap insane Loomis gets over finding Michale Myers after presumably not having slept for the past 15 years, but there’s something missing to the subsequent scenes after such a great beginning.

I won’t sum up the whole movie for you but as you can guess that staff member, along with others, are going down. In fact, the body count in this is much higher with Myers killing nine people on-screen as opposed to the four in Halloween, the first of those being his naked older sister when he was a child. It also has some of the most iconic kills in the series, including one that stuck with me from when I was a kid and lived up its brutality today, involving a hot tub.

It also gave us the twist that Laurie Strode and Michael Myers are siblings. What this means for the upcoming Danny McBride and David Gordon Green reboot, I do not know since they said they want their film to be a direct sequel to the first, but there’s something iconic and classic about this twist. It’s that twist I mentioned earlier that’s a big part of the series and has stuck with a lot of people, even if they’ve never seen any of these films, so I’m hoping this film stays canon for reasons other than being enjoyable.

While Carpenter did not direct this one, his and Hill’s fingerprints are all over this film script, like the first trick or treaters at an unattended bowl of candy left on a neighbor’s porch nestled in the lap of a scarecrow with a sign reading, “Take only one, please!” The problem is, director Rick Rosenthal is there in the scarecrow costume ready to ward off the greedy trick or treaters. I don’t think he did a bad job by any means. Rosenthal had a pretty well-received career after this directing films and television. He even returned to the Halloween series to direct what I believe, while I often find it hilariously awful, is the most underrated/overly-hated entry in the franchise, Halloween: Resurrection.

After watching Halloween II back-to-back with the first, you can tell that Carpenter is by far the superior director. He had his budget limitations, and forcing Los Angeles, CA, to look like some suburb in Illinois forced him to get creative with camera angles and overall production design, but the thing that truly set Carpenter and Rosenthal apart was Carpenter’s work with getting the best performances from his actors. The characters are all stereotypes, but he seemed to really push the actors in the best possible directions to get performances that actually make us care about them. Script-wise, Carpenter and Hill accomplished it again, but in the hands of Rosenthal, he couldn’t quite cut it. The dialogue all reads with the same charm, but the people either come off too needy or too much like jerks, which could’ve easily happened with a different director in the first one.

Still, Halloween II is a lot of fun and Rosenthal’s direction in the POV of Myers is debatably even better than the POV work Carpenter did at the beginning and throughout a lot of Halloween, but Donald Pleasence as Loomis still really shines as one of my favorite characters in horror movie history. In fact, he’s a constant in his paranoid, near-maniacal performance in the next three Halloween films he stars in. All in all, Halloween II is certainly a spooky and enjoyable watch for any horror movie/slasher flick fan. And if you like a body count, than this is definitely one for you.

Be sure to check Halloween II now streaming on Starz and, of course, have a Happy Halloween! Just be careful trick or treating!