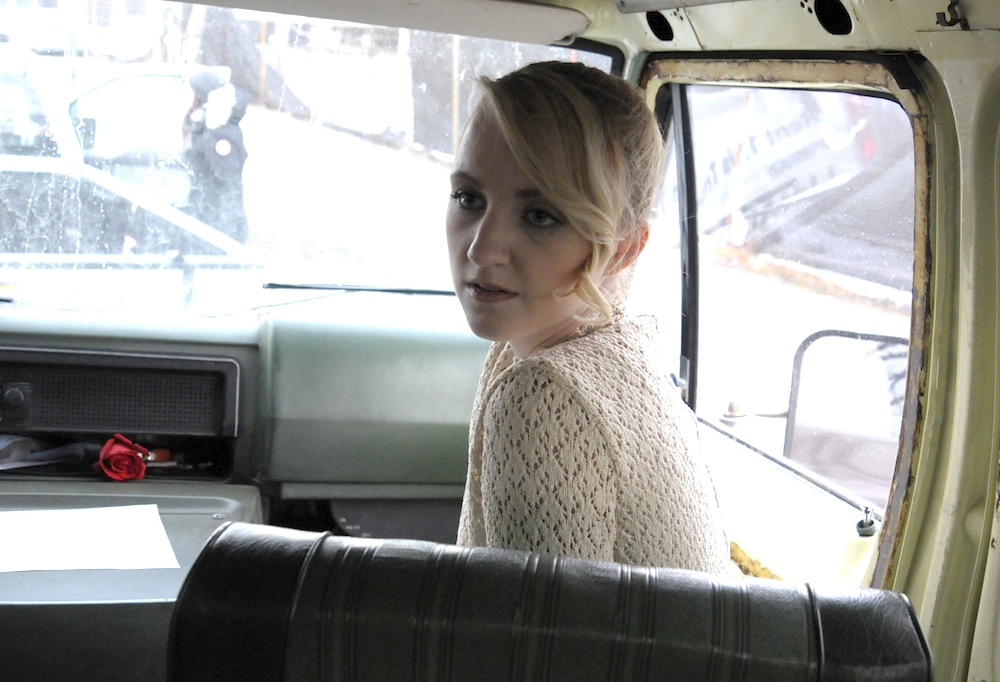 Evanna Lynch is known the world over as Luna Lovegood from the Harry Potter films, but since that series ended, she has appeared in other films including G.B.F. and My Name is Emily. Lynch’s latest role is in the indie feature Addiction: A '60s Love Story, a gritty look at the 1960s. The film follows Max Bornstein (Ian Harding), a young man who looks as though he has it all -- but underneath it, he has troubles galore: he is addicted to heroin and is working in the underground, illegal pornography industry, all while trying to raise his son. Lynch stars as his Theresa Bornstein, his struggling wife who was raised in the Catholic church. The film is a rather haunting and disturbing piece that takes a harsher look at the often idealized 1960s.

Quite a departure from Harry Potter!

Lynch chatted with us about her role in the film, how she learned to do a New York accent, and whether or not she will be involved in the newest prequel to the Harry Potter films!

YH: What can you tell us about your new film, Addiction: A '60s Love Story?

EL: Addiction is a story based on the real-life experiences of Max Bornstein, a teenaged guy living in '60s New York, who was on the verge of infinite potential when he lost it all to his addiction. I think it’s about that dangerous combination of restlessness and invincibility we all feel in our youth as we’re scrabbling clumsily into adulthood trying to find a sense of self and purpose. But Max’s story is unique because he went all the way with his urges; he went to extremes in every sense. He’s both lucky and admirable that he made it back from that period. There was no voice of caution or restraint that tempered his excessive lifestyle. There was just an insatiable curiosity and hunger to keep going wherever his body drove him. I play his high school sweetheart and later his wife, Theresa, who unwillingly gets strung along for the ride. And it is very much a love story to that recklessness of the '60s and a cautionary tale to youth who feel they’ll never falter. Max is such an interesting person, all the wiser for these experiences I’m sure, but you can tell he nurses profound feelings of regret and pain for the choices he made when he was younger. I imagine making Addiction helped him heal some of those old hurts, but what comes across loud and clear from this film is that not giving a damn about yourself or your loved ones isn’t awesome or badass; it’s just a form of fear expressing itself as you hide from a life you’ll wish you’d fully engaged in.

YH: You are actually Irish, but your character, Theresa, has a bit of a New York accent. How did you prepare for that?

EL: Funnily enough, right before I signed on to Addiction, I was working on a play about [magician Harry] Houdini in which I was playing his wife, Bess, who came from Brooklyn. I learned a light Brooklyn accent (though Bess spoke with a neutral mid-Atlantic accent in actuality, shhh...) for that one by working with my voice coach, Claudette Roche. I think it helped me when, a few weeks later, I got the role of Theresa, but Theresa’s accent is specifically Jersey, and my challenge then was to train my ear to distinguish Jersey from Brooklyn accents. To be honest, I struggled at first to hear the differences between the two. I know that must sound daft to a native Jersey person, but most Americans think there is such a thing as a standard Irish accent, which couldn’t be more ludicrous to me. I had only a few days to prepare for Theresa, and as a result, I did not have the accent perfected by the time the shoot began. I was getting anxious over it and obsessing over something that needed to be innate for the character, and then, one day, Max (not Ian -- actual Max Bornstein, the writer and person) was walking by as a wardrobe assistant was doing adjustments on one of my outfits, and he stopped dead and said "That! That’s how Theresa sounds!". And as is the way on Indie movie sets, Mandy, the striking, fabulous and frankly run-off-her-feet wardrobe assistant, found herself working overtime as my on-set vocal coach. It was one of those desperate, last minute, serendipitous moments that only happens on indie movies, and that gracefully saves you from total embarrassment. My accent was far from flawless, but Mandy’s coaching helped me so much to get into the mindset of the character. She also taught me how to hand-talk, which I found very exciting and gave way to a new sense of confidence and assertiveness that all Jersey women seem to have.

YH: You actually grew up Catholic, and Theresa is Catholic. Were you able to relate to this part of her character?

EL: I did relate to the values and expectations of the Catholic family, and also the somewhat innocent and naive vision you hold for your future family, especially as a woman. It may sound discordant with the rigid nature of the church, but I believe my Catholic background is responsible for cultivating a certain romanticism in me, for believing in the one true love that I’ll marry and that everything will be ordered once that falls into place. I still have that vision no matter how society and common sense try to to tell me otherwise! So, I related to how hard Theresa fought to keep her family together and how determined she was to turn a blind eye to the cracks that were slowly forming. I wouldn’t want to let go of that perfection we had as a family either, and I’d probably find it hard to blame my partner. But her story more made me appreciate the generation I’m from, that questions anything, that assumes permission to question everything and doesn’t deferentially accept the status quo. Theresa gave everything up to devote herself to her husband and her children, at a very young age, and that kind of love and loyalty is a beautiful, rare thing, but I’m glad I don’t feel the same pressure or urgency to be married and start raising children. I’m changing and growing a lot these days, and I know it would be a disaster to marry even at the ripe old age of 24. I’d end up deeply unhappy. Theresa and Max are still together now, so they were clearly following their hearts and that was meant to be, but I personally am enjoying the freedom of being unattached! There is a delightful feeling of self-indulgence -- the fact that I can bugger off to the mountains and meditate for a month if I want to, for example -- that I think Catholicism shames you for, and I’m grateful not to be held by those mental shackles. I have a lot more exploring to do before I take responsibility for fresh, new human's mess. 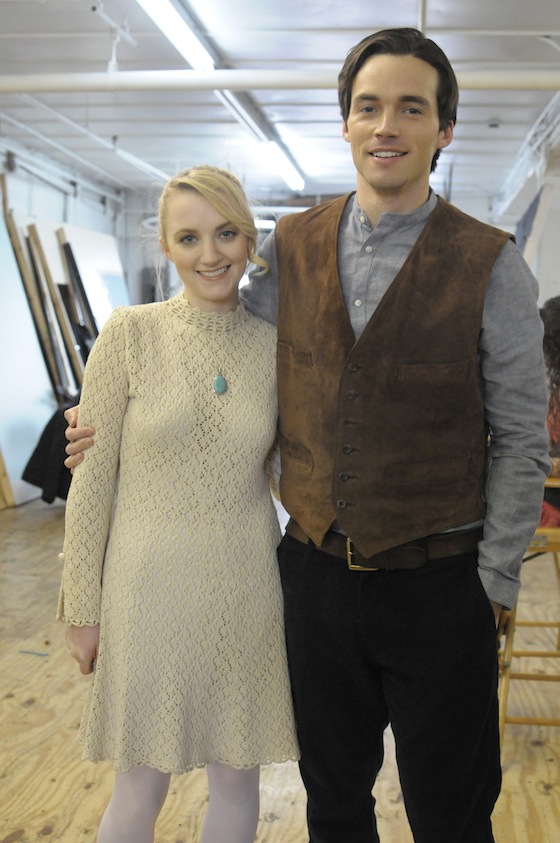 YH: Harry Potter has been in the news again! Are there any plans for you to appear in Fantastic Beasts and Where to Find Them, since Luna married the grandson of Newt Scamander?

EL: No. I swear! People keep asking me like I’m that good at trolling, but I’m really not kidding! I mean, I continuously drop hints around the producers and any time I see Jo [J.K. Rowling] and even to the WB twitter accounts, but nothing has sparked their interest yet! It doesn’t seem likely, in fairness, given that it’s set 70-something years before Harry’s time. Luna would need a seriously sturdy time-turner. Regardless, it gives me great joy to see Eddie Redmayne resplendent and quirk-tastic in his beautiful blue coat and to imagine Rolf Scamander not falling too far from that tree.

YH: Considering how popular the Harry Potter films and novels are, have you ever had any interesting fan interactions?

EL: You have to remember, I was a proudly nutty fangirl before I got let in to the Potter cast! So, when I say nothing springs to mind, it’s because I was one of those hyper Potter enthusiasts that would make the other cast members step back nervously at times, and none of the odd behaviour I witness really phases me. In all seriousness, though, I do really relate to the feeling of adoring a book, movie, and character so much that you find it hard to act normal in the presence of people who embody that world to you. I really know what it feels like to pour your heart into your fandom and how much that sense of sanctuary can mean. Also, Luna only ever attracts the coolest, most interesting and artsy people, so the popularity of the films has only ever connected me with awesome spirits. From time to time, I’ll have awkward encounters where someone will follow me down the street insisting that we must have gone to college together or I dated his second cousin. But nothing too crazy, from my perspective.

YH: Do you still keep in touch with your Harry Potter co-stars?

EL: Yes, of course! You can’t go through an experience like that without being forever bonded! We all see each other at the various theme parks, convention appearances, and the like because there is a reassuringly endless stream of Potter-related events. And we all support each other’s creative projects, which often bring about reunions. My closest friend from the films is Scarlett Byrne, who played Pansy Parkinson, who is just a beautiful person. She lives in L.A. too, so we kind of seek each other out for a grasp on sanity in this mad town sometimes! I’m good friends with Bonnie [Wright] and Katie [Leung] also, but none of us are very good at keeping in touch, and we always end up seeing each other again before long anyway.

EL: I have another feature coming out next year called My Name Is Emily, which was a dream role for me, and it had the added bonus of being the first film I shot in my home country! I don’t work a ton because I’m very choosy about my projects. Not because I’m a snob; simply because I’m not able to connect unless I fall in love with the story or the character, unless it stirs something exciting that I’m itching to explore. It’s important for me to only commit to things I’m passionate about. I’ve learned I’m not good when I’m lukewarm. Other than that, I am writing my own fiction, which I hope will soon take form in a book. I also do a lot of animal welfare work, and it wouldn’t be the most surprising thing in the world if I disappear in 10-15 years to start a cat sanctuary.

Addiction: A '60s Love Story is in theaters and on VOD. Be sure to keep up with Evanna on Twitter!