Cartoons: Not Just For Kids Anymore! 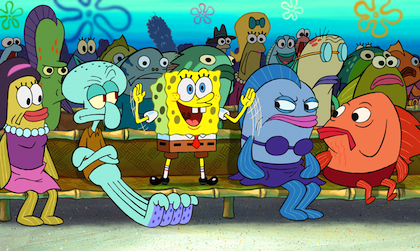 Cartoons have always been an American staple. Being a kid on a Saturday morning -- bowl of cereal in hand while being glued to the TV -- is a memory most of us can relate to and cherish. The thing is, at that time, cartoons were just for kids, but now we know they have evolved into something much more accesible to all ages. In this era, when saying the word cartoon, we have to ask if we mean for adults or kids. Maybe because we are still kids at heart, or maybe because we just like the nostaglic feeling of cartoons, but more and more of them are being developed for a variety of ages. Below I have created a list of the ten most popular cartoons or animated series in America that can appeal to any age group!

One of the first "adult" cartoons to be created, and the longest-running cartoon series to date, "The Simpsons" is a household name. The show has lasted 25 seasons since its debut in 1989, and it’s still going strong!

Every adult who watches this show will argue that this it is a show secretly made for them. Some will flat-out say it is an adult show, but the reality is, this kids cartoon is just so dang good that we refuse to admit that it was meant for kids. Not that it matters. We all can rock the merch of "Adventure Time" just as well.

To watch "SpongeBob Squarepants", you don’t have to be in any certain age group. In fact, in 2013, there were just as many adults without kids watching the show. Small, hidden jokes can crack up the adults while kids are still laughing at Squidward floating away in a bubble.

Seth MacFarlane’s "Family Guy" had to fight to become a favorite in American’s hearts. The show aired in 1998 but was taken off the air after three seasons. It came back strong in 2005 after high ratings from reruns and huge DVD sales. It now stands in top 10 lists from TV Guide to IGN of popular TV shows.

As many people as there are who love this series, there are just as many who do not know about "Avatar: The Last Airbender". So, why did I add it to the list? Well this animated cartoon, an anime, is actually one of the most popular searched cartoons by Americans. It also stands as one of the most-watched cartoons on Netflix, is second on IMDb’s list of highest rated animated series by fans, and IGN listed it in their top ten adult cartoons. Any age can enjoy "Avatar: The Last Airbender", but most kids might not get some of concepts of the TV show.

A show that has  appeared back on air after first bowing out in 1995, "Batman: The Animated Series" is another heavily-watched cartoon, actually making it in the top ten on nearly any list that you can find, mainly popular with guys. The show comes in third on IMDb’s highest-rated animated series by fans.

This is another one of those kids shows that you secretly think was made for adults. This Disney series keeps it PG, but just like "Scooby-Doo" there are many clues and hints around this series that makes adults feel it’s for them. Or at least that’s what they keep telling themselves. Maybe it’s just a really good kids show that we all love?

This Fox cartoon series is one of those shows that will leave you feeling out of the loop in the break room if you haven’t watched any episodes. They’ll all be making references about the show or laughing at the memes online and you’ll be the one that is clueless. "Bob’s Burgers" is a show worth investing in if you miss cartoons.

"A scientist and his grandson" is how most people will explain the premise of this show. Oh, and that it is hilarious, yet sometimes so deep that it will have you reflecting back on life. I’m guessing that is why it got ranked #1 by fans on IMDb’s highest-rated animated series!

What are some of YOUR favorite cartoons?