Burning Questions We Have After the "Riverdale" Season 4 Finale! 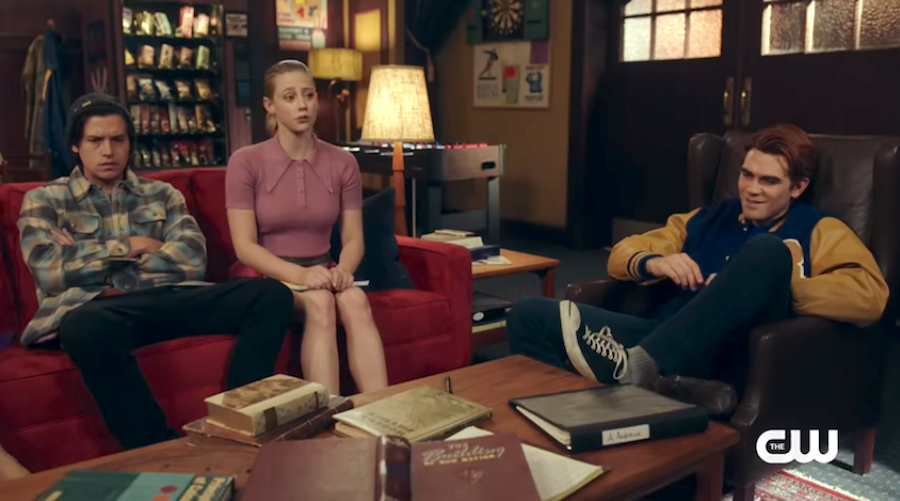 Popular CW drama “Riverdale” just concluded its 4th season. Unfortunately, fans were cut short several episodes due to COVID-19 shutting down production. Season 4 finished with 19 episodes instead of 22, and now there is no exact timeframe on when the series will return with Season 5 due to production hiatuses everywhere.

The Season 4 “finale” was improvised but still exciting and action-packed! The parents of the main characters stood up and tried to get prom back while a creepy school video got Principal Honey (Kerr Smith) relieved of his duties.

Jughead (Cole Sprouse) wrote a story for the University of Iowa which revolved around the teens killing Principal Honey, and most of the story was acted out in the episode.

However, the season ended on a major cliffhanger with the voyeur sending out another spine-chilling video. Let’s look at some questions heading into Season 5!

1. Who is behind the videos?

The Season 4 finale saw Betty (Lili Reinhart) and Jughead drive out into the woods at night to a run-down, abandoned cabin after seeing a tape showing the place. Inside the cabin, it was an utter mess. Things were out of place and in shambles, but another tape awaited.

When playing that tape, the two teens once again saw a video of masked figures, but this time pretending to be them and reenacting Jughead’s fictional story in which Mr. Honey was killed. The biggest question is, how does the voyeur even know Jughead’s story? And who was the person labeled Mr. Honey? Was it the actual one?

The culprit behind these videos seems to know a lot of dirt when making these videos, as evidenced by the Jason Blossom murder reenactment video too, among another. This remains one of the biggest mysteries in the show at this point, and it seems that someone is watching in the shadows. Could more trouble be brewing for the teens in Season 5 as the voyeur might try to pull off something even more sinister?

2. Will Betty and Archie become an item?

Towards the end of the season, it seemed apparent there was more chemistry and romantic interest between Betty and Archie (KJ Apa), despite both being involved with other people. One scene in Episode 18 saw both lying in a bed together and eventually holding hands.

This could spell relationship drama when the new season picks up, and it will be very interesting to see how Jughead and Veronica (Camila Mendes) both react should they find out about Betty and Archie potentially having feelings for each other.

3. How will prom and graduation play out?

In aninterview with TVLine, show creatorRoberto Aguirre-Sacasa explained that Season 5 will start with the three missed episodes from Season 4. The good news is that fans will get to see the prom and graduation episodes after all! The only thing we don’t know is when.

Both events are bound to feature major plot points as secrets may come to light, the friends deal with their impending departures from Riverdale, and of course the "Barchie" romance factor.

4. How will the series navigate the main characters heading in separate directions for college?

Even though Season 5 will start out with the teens finishing high school, the remainder of the season is bound to show the characters heading out to college at some point. This begs the question, how will the series operate then? With many of the main characters heading on separate paths, Riverdale (the town) is not a central location anymore. Could the series focus on the separate stories of each character in college, or maybe just the entire summer before they head out on their individual paths?