'Bridge of Spies': Lowkey Spielberg Packs As Much Punch As Blockbuster Spielberg! 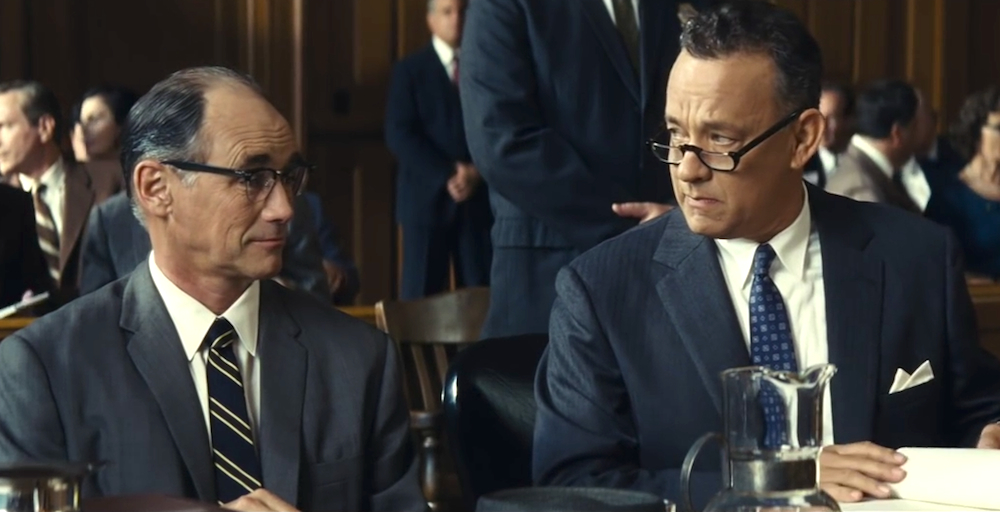 Steven Spielberg and Tom Hanks are two of Hollywood’s finest entertainers, and their latest combined effort was released this past Friday to a cornucopia of glowing reviews. Well, far be it from me to miss out on the opportunity to join a sensible bandwagon with exquisite taste, so I think I’ll do just that.

When you look back at the filmography of Mr. Spielberg, you are greeted with behemoth cinematic offerings that are responsible for the very existence of the term “blockbuster”. But Spielberg’s body of work is not merely limited to grand spectacle, and some of his best works (please see Munich if you have not already) have been his more quiet and less alien-infested ones. Bridge of Spies falls into realm of smaller Spielberg films, but by smaller I only mean in terms of visual wows and high adventure. The appeal to our better moral center and the idea of nobility more than make up for the lack of whip cracks and shark explosions. The most important thing that Bridge of Spies does is give us a hero to look up to in the form of James Donovan, a real-life Brooklyn lawyer who found himself caught up in the center of America’s quiet conflict with Russia. For my money, heroes are always welcome in this world, and it’s especially nice when we get to hear the voices of some of the more unsung ones.

As you take a hearty jaunt through the inter-web in relation to this film, you might encounter many folks likening the film to something made by legendary Hollywood director Frank Capra. Yes, this picture is certainly Capra-esque, and Hanks’s James Donovan is certainly a strong reminder of the likes of Jefferson Smith and George Bailey. James Donovan is a man dedicated to upholding the law. All of Capra’s films, for the most part, featured good people fighting the good fight, and their optimism is glaring to a fault, depending on your taste, but it is that optimism and struggle to do what is right that stands the test of time. Usually the antagonist is a centrally-appointed figure of wealth and power, but Capra has always allowed for the darkness in those rotten figureheads to also leak into the hearts and souls of decent people as well. We are all capable of being the villain in a Capra film if we let go of certain basic ideals.

That clip above is from Mr. Smith Goes To Washington, a film that Bridge of Spies has been ragged on (in a good-natured way) for rehashing. And while Spielberg’s Cold War drama doesn’t quite approach the heights of melodrama as Capra’s 1939 classic, it does go on the march in order to champion the fundamental ideas of liberty and decency that this country was founded upon.

A soviet spy by the name of Rudolf Abel is captured during the height of the Cold War in the late-1950s. An insurance attorney from New York (Hanks) is assigned to give Abel a basic defense before he is summarily, and matter-of-factly, sentenced to die. Donovan is a professional lawyer who knows how to play the system. But when he plays his game, it is in the confines of the legal realm and always for the good of whom he represents. People are okay with the laws and guidelines of this land... until they are not, and Bridge of Spies shines a light on a very trying time in America when people genuinely feared an attack from the Soviet Union and yet were being asked to rise above those fears in order to show our adversaries that our way, the American Way, works. Despite the disgust and anger from his fellow citizens, Donovan is determined to give his client the best defense he possibly can, because that is what a good American would do, despite the claims of paper patriots who talk the talk but rarely put into practice what they preach.

In the hands of a lesser filmmaker (and a lesser actor, for that matter), this material can come off as being overly sentimental and preachy when it comes to reminding us about the principles of justice that supposedly make these United States of America the greatest country in the world. But Spielberg presents this tale with a cool and steady hand, and Hanks’s charming Everyman persona doesn’t allow for us to get lost in the Kafka-esque maze of foreign political procedures that make up the second-half of the film. Donovan is our focal anchor, and a solid one at that. We are calm when he is calm. We laugh when he laughs, and we are appalled when he is appalled. We see the world through his eyes because he is a person that many of us aspire to be -- a cool, rational, charming, witty, and kind person who is willing to take risks to do what he believes is right.

A huge amount of credit should also be given to Mark Rylance for his excellent turn as Rudolf Abel. As a man who is being punished for serving his country, Abel is a quiet figure, and one could almost call him sad. But when you truly look at him, what you see is a man who is totally at peace with himself and the role he has been chosen to play in the quiet war between two countries. Donovan sees past the hate-filled propaganda that blinds the rest of the free world and, instead of looking at the enemy, he is looking at a man of conviction whose dedication to his country is not unlike Donovan’s dedication to American Law. I predict that we will find Mr. Rylance vying for Best Supporting Actor in this year’s Oscar Race, and if I am wrong, then I’ll eat two Big American Breakfasts.

Bridge of Spies is a film that appeals to the best in all of us and never becomes a chore to watch because of the lessons it tries to teach us. We live in a complicated world where doing the right thing is almost never easy, but if we look beyond our knee-jerk emotions and focus on the long game, then we will see that our efforts to be better people are hardly wasted. Spielberg has brought to us a film that I believe will one day be considered an American classic. It’s an involving and moving picture fueled by A+ performances and a devilishly charming script penned by Matt Charman (with an assist from my favorite filmmakers, The Coen Brothers). I cannot stress enough how worth your time it is to go out and see this film, for it is a representation of the finest kind of filmmaking and one that will stick with you well after you leave your local cinema.