Billy Eichner Taking Over the Streets of NYC and the Internet! 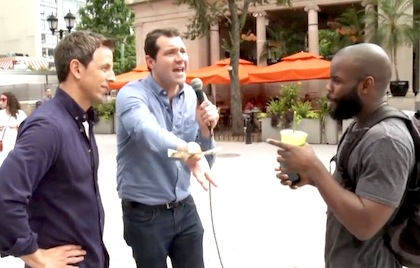 You know that feeling when you watch someone so hilariously over-the-top that you can’t stop laughing? Someone who crosses boundaries and makes people uncomfortable just for pure humor? Someone who engages in candid street interviews for genuinely comedic material? I do. And the name that pops into my head is Billy Eichner.

So, I’m sure all of you guys have seen or at least heard of Billy Eichner from his amazing segment with Seth Meyers that aired during the Emmy Awards last month. Need a reminder? See below:

Eichner has quickly rose to notoriety as a comedian who made his mark with his hilarious Funny or Die videos as well as being the star, executive producer, and creator of his "Billy on the Street" game show that airs on Fuse TV. The unfiltered and unapologetic comedian hits the streets of New York to test strangers on their pop culture knowledge. If the strangers do well, they can win cash (a whole dollar)! If they don’t know the answer, or just simply disagree with Billy, they lose -- by getting screamed at right in the face!

It’s genius and so entertaining. Many celebrities have joined in on his madness, including as Paul Rudd, Drew Barrymore, Amy Poehler and many more! Billy and show recently celebrated a three-year anniversary and released a compilation video of some of the best bits; check it out:

Sounds like an amazing success, right? But wait, there’s more to the story.

Before Eichner was lucky enough to become mainstream, he was a struggling actor and a Northwestern University graduate, just hoping to find any work possible. He originally created “Forest Hills State of Mind”, a spoof of the Jay-Z/Alicia Keys smash Big Apple-ode “Empire State of Mind”, about what it was like to grow up as a middle-class gay man in New York City. It was his first video to go viral. Eichner, feeling inspired, created his first episode of "Billy on the Street" about the Oscars. After that, many networks wanted to sign him for his show, including E!, VH1, Bravo, and Comedy Central. Fuse went above and beyond these other networks and offered him a straight-to-series guarantee of at least 10 episodes on TV. On December 22, 2011, his first Funny or Die episode aired.

And the rest is history!

"Billy on the Street" airs Friday nights at 7pm on the Fuse channel! Go check him out!