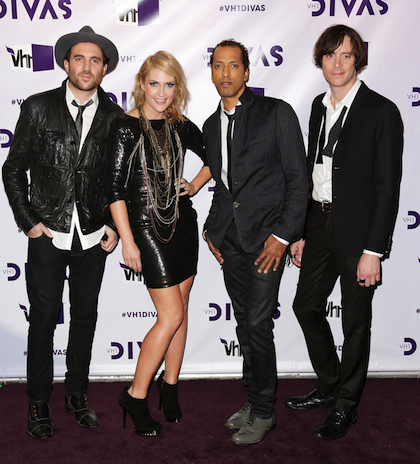 Drake and The Weeknd aren’t the only gems the Canadian city of Toronto has to offer to the musical zeitgeist. This time, though, instead of an emotionally-driven rapper or a cryptically smooth indie R&B singer, this act comes in the form of new-wave, alt-rock band Metric, who are finally starting to make mainstream waves after being around in the industry for nearly 15 years!

Formed in 1998, and having been known by other names like Haines & Shaw and Mainstream, Metric consists of original members Emily Haines and James Shaw and their friends/band add-ons Joshua Winstead and Joules Scott-Key.

Often described and praised for their “innovative approach on the music industry”, Metric also has roots in Brooklyn, New York, where they moved to start making a name for themselves outside of their native Canada.

To tons of acclaim, they have released 5 albums, many of them having been independently released, and are the recipients of a couple of Juno Awards, the Canadian equivalent to the Grammys. Big recognition for a band still on the up-and-up.

Their most celebrated album to date is the 2009 release Fantasies, which spawned the singles “Sick Muse”, “Gimme Sympathy”, and “Help I’m Alive”.

Last year’s Synthetica contained some really great tracks as well, the likes of which including  “Youth Without Youth”, “Breathing Underwater” (which was featured on the hit TV show "The Vampire Diaries"), and “The Wanderlust”, featuring the late and great Lou Reed.

If you like Tegan and Sara and the Yeah Yeah Yeahs (whom they shared a loft with when they lived in New York), then there is surely a place in your music library for Metric.