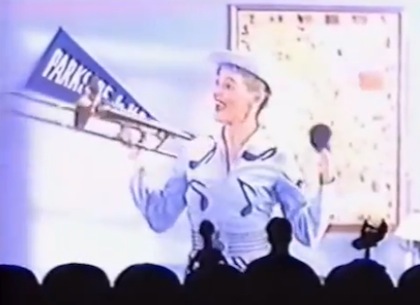 That title probably has a majority of you scratching your heads, but I am nothing if not an educator, so get out pen and paper, kids, cuz I’m about to drop some knowledge on you!

For starters, a brief(ish) history of the glory that is “Mystery Science Theater 3000”. Back in the Ancient Times – i.e. the late-1980s – a Midwestern prop comic by the name of Joel Hodgson created a little low-budget cable access show called… you guessed it… “Mystery Science Theater 3000” (or MST3k, for short). The concept was simple – a human (Joel himself) marooned in space forced to watched crappy films, and the only way to maintain his sanity is to do what we ALL do when we watch movies in the comfort of our own homes: riff on them. Helping him in this noble task are two robots that he built (puppets, actually) named Tom Servo and Crow that are programmed to make with the quips along with him. You’ve probably seen the famous “silhouette” motif at some point, like so:

The show was eventually picked up by the then-fledgling Comedy Central and became an instant cult hit. Midway through the 5th season, Joel left the show to pursue other… stuff, and head writer Michael J. Nelson took his place on the Satellite of Love (thus igniting the infamous Joel vs. Mike Flame Wars… a dark time in MST3k history). Comedy Central cancelled MST3k after a truncated 7th season, but thankfully, the SyFy Channel (then known as the Sci-Fi Channel) picked up the show, and it ran for an additional 3 seasons before being cancelled for good in 1999. Sigh.

The appeal of the show is largely due the breadth of references that the show employed. Seriously, if there is ANYTHING on the planet you're into, the MST3k guys have made a quip about it at some point... no matter how obscure, endearing audiences with an odd (yet exciting) feeling that these guys were literally in your head! Celebrities that count themselves as MST3k fans include Neil Patrick Harris, "Simpsons" creator Matt Groening, Weird Al Yankovic, Joel McHale, Roger Ebert, Kim Cattral (a long-standing crush of robot Crow), Judd Apatow, Shaun of the Dead director Edgar Wright, and tons more!

The cast and crew of the show have gone on to do other things… all very MST3k-inspired. The group split up into two factions – The three that stuck with the show until the very end (Nelson, Kevin Murphy, and Bill Corbett) now run Rifftrax, an innovative idea wherein they record hilarious commentaries for mainstream movies that you can purchase and download to play in sync with your DVDs, thereby finding a wonderful copyright loophole. Elsewhere, those former MST3k peeps who were there from the very beginning (Hodgson, along with Trace Beaulieu, Frank Conniff, Mary Jo Pehl, and Josh Weinstein) started Cinematic Titanic, which stays truest to the MST3k format, appearing on screen in silhouette and focusing on old school B-grade sci-fi flicks, although their main outlet is live shows. Hodgson actually spent the years following his departure from MST3k trying to distance himself as much as possible from his creation (especially since other folks were now running it… awkward!), but in recent years, his views have softened and he now embraces his place in history as the mastermind behind a pop culture phenomenon. All of which culminated in his involvement with Reddit’s MST3k Turkey Day Marathon!

Now you’re probably asking, “Why should I care that Reddit is hosting a MST3k marathon on Thanksgiving?” Well, you see, back during MST3k’s heyday (the early-1990s), every Thanksgiving, Comedy Central would put on a 30-hour-long marathon of MST3k episodes on Thanksgiving Day, and the annual “Turkey Day” event became a much-loved tradition amongst us MSTies (I’ve been a card-carrying member since 1993). So, ever since Joel announced this morning via Twitter that the Turkey Day Marathon was being resurrected via Reddit, MSTies everywhere have been rejoicing! Even better? Joel himself will be hosting the event, which will begin at 9am PT on November 28 and will feature 6 classic MST3k episodes streaming back to back!

If YOU are a MSTie, Joel is currently taking requests via Twitter (using hastag #MST3k) – I’ve already thrown my hat in the ring for one of the Master Ninja movies – but he will ultimately be the one who chooses which episodes air. He’s got his work cut out for him, though, considering that even he admits to not having seen most of the Mike-era episodes… that’s 4.5 seasons worth of material to sort through!!!

For MSTies everywhere, this is a grand turn of events. For the rest of y’all out there who are still confused but intrigued, now is the perfect time to acquaint yourself with this little Minnesota-based program that’s been providing laughs for a quarter of a century.