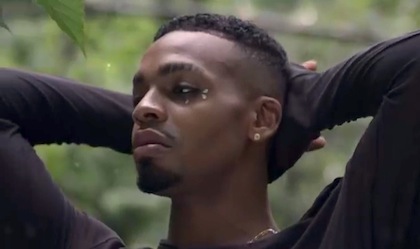 If you gave The WeekndT-Pain’s vocoder and made him sing in the same distinctively emotive yet street style as urban contemporaries like Future and Drake, you would get an artist who’s out-of-this-world yet captivating vocals are somewhere along the lines of newcomer Ian Isiah.

The vocalist, who belongs to the Hood by Air and GHE2O G0TH1K music collaboratives, is an underground artist and New York native that, although still has yet to make a huge splash in the mainstream R&B market, has a talent and charisma that is so delightfully weird and good, you can’t help but want to listen to and watch more of him.

Isiah just recently released his debut mixtape, The Love Champion, which features other big names in the underground R&B scene, including Mykki Blanco and Le1f.

His most popular single is the tantalizing and oh-so haunting “Freak U Down”, which, despite the name, is an artsy record featuring visuals of a horse, dancers in decrepit warehouses, and a rocky beach. All usual fare in a song about not being loved back, right?

For more on upcoming artist Ian Isiah, visit him on his Twitter page, and check out his videos on YouTube!