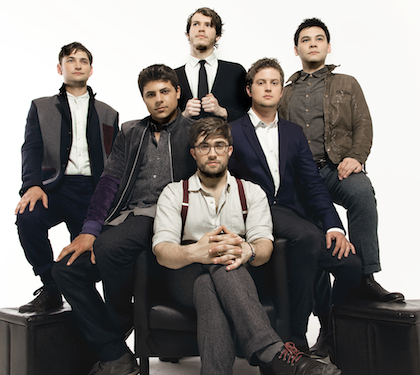 The visual arts have always captivated my attention and efforts, whereas music, at least until recent years, has always been something that I enjoyed on a fairly casual level. But good art, no matter what shape or form it might take, deserves to be recognized.

Recently, I found myself standing in a place called Glasslands Gallery in Brooklyn, New York. I would’ve sat, but there were no chairs readily available. Anywhoo, the reason I departed my usual comfort of Queens for the hipster-lined streets of Brooklyn is that my friend invited me out to see a band. I don’t usually jump at the chance to go to concerts, but I had nothing else to do that night since I ran out of "Breaking Bad" episodes to watch on Netflix. So, off to Brooklyn I went to see a band called Great Caesar. For the sake of everyone’s time, I’ll stop beating around the bush and just tell you that the band was awesome.

As someone who has been a little more than disappointed with what the music industry has had to offer lately, it is an absolute relief to encounter a band who not only sounds great, but who also looks like they’re putting thought and effort into what they are doing. It was halfway through the first song they played when I turned to my friend and said the words “This is fun”. And that is the simple and yet great gift that Great Caesar is slowly but surely bringing to the world. They are making music fun again. They enjoyed performing that evening, and that enjoyment, combined with some excellent musicianship, spread out over the crowd like a plague of awesomeness. I haven’t cheered that loudly since J.K. Rowling announced that Ron and Hermoine would spend most of the next Harry Potter book in divorce court. But seriously, though, I spent an intensely fun evening listening to some damn fine music.

Now how should I describe this fine music that I speak of? Well, think of energetic and soulful Rock with a nice combination of Jazz. But if you’re really jonesing for a proper description of the music, then I think the best thing to do is to look to Great Caesar themselves. Cast your eyes downward at what will surely be the first of many great music videos by this awesome band. It is a touching video about acceptance that debuted on Martin Luther King Jr. Day and was quickly supported by such notable artists as Wyclef Jean and Russell Simmons on their respective Twitter accounts.

if you like what you heard, keep an eye and ear out for their forthcoming EP, featuring the track "Still Love", which you can check out EXCLUSIVELY here on YH, below!

Convinced yet? You can keep track of Great Caesar's tour dates (which kicks off Saturday, March 29) by visiting their Website and following them on Twitter. This is just the beginning for the likes of band members John-Michael Parker, Adam Glaser, Sean Andrew, Tom Sikes, Mike Farrell, Stephen Chen and their manager Karen Gil as well. And so, to them I say, thank you for the great tunes, and please don’t think about stopping anytime soon.