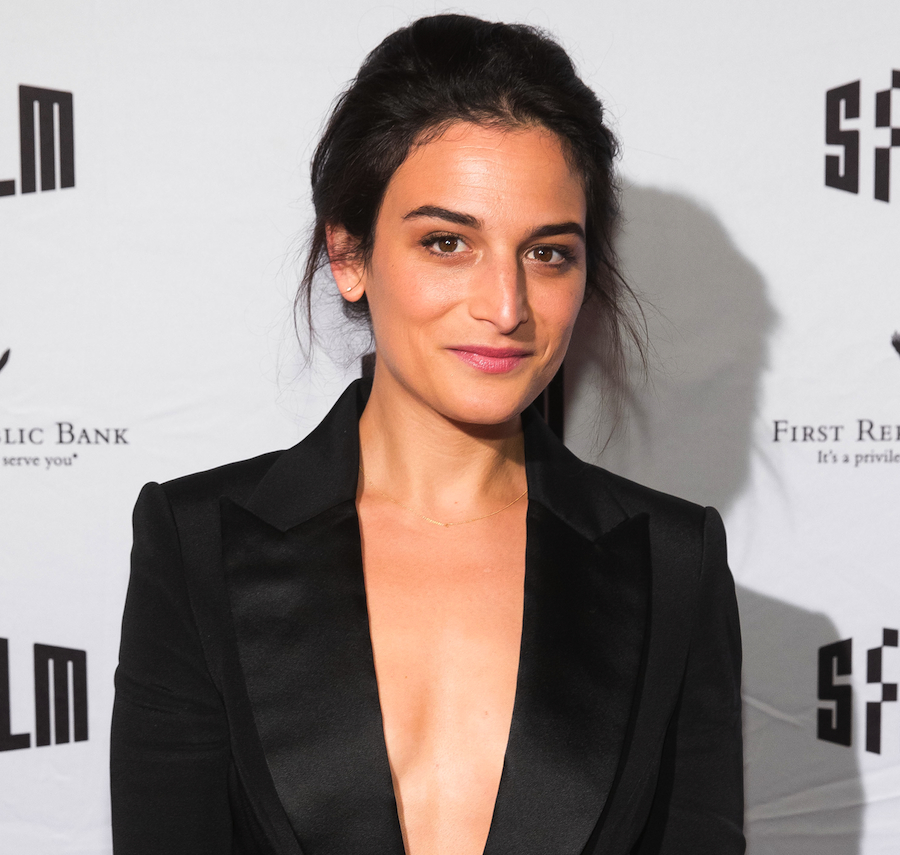 Jenny Slate has recently gained a touch more media attention than her usual sporadic articles about her latest projects, due in part to her high profile former relationship with Chris Evans, but to us, she has always been a star in her own right. With a signature dulcet yet pliable voice that can range from whiny Daddy's Girl in "Parks and Recreation" to an adorable Pomeranian in The Secret Life of Pets, and with the comedic timing of the best of them, Jenny Slate is a force to be reckoned with in the entertainment industry. I wish I could find pants as versatile as Jenny Slate’s ability to seamlessly take on such diverse and engaging roles.

Most recently, Slate and Evans (AKA the friendliest exes in existence) premiered their new movie Gifted, a drama about a single man (Evans) raising his 7-year-old niece, who also happens to be a genius. Her impressive math skills draw attention from his mother and a teacher (Slate) who first notices Mary’s gifts. This role is different than the projects that we’re used to seeing Slate in, such as gripping indie movies and comedic television series. This movie puts Slate in the role of a person who is secure and easy to understand, rather than a “tripping through life” kind of character that Slate has said she is used to playing.

For example, Slate is widely known for her role in the critically acclaimed indie movie Obvious Child, where she takes on a role reversal of the television trope we’ve come so familiar with: the "man child" faced with a unexpected breakup and an even more unexpected pregnancy. The movie was praised as an extremely honest take on the romantic comedy genre. Another one of her indie successes was My Blind Brother, where she played Rose, a woman at the center of a love triangle between two brothers. This is another role where Slate takes on the task of playing a struggling character, grappling with guilt over a deceased ex-boyfriend, and a desire to please.  These movies firmly placed Slate at the top of the fictional list of dark comedy queens.

However, before Slate was a dramedy star, she was known for her comedy work. Her first major breakout gig was as a featured player on "Saturday Night Live"; although she was only on the iconic show for a year, she went on to voice and create Marcel the Shell with Shoes on. The stop-motion animation film short is Slate’s collaboration with Dean Fleischer-Camp, which focuses a googly-eyed shell (who wears shoes). It is both adorable and funny in all the weirdest ways, which is why the series found almost immediate success when it debuted on YouTube.

Slate’s long filmography doesn’t stop there -- she has had reoccurring roles in hit shows such "Parks and Recreation" playing the spoiled Mona Lisa, Sarah in Showtime’s "House of Lies", and she played multiple characters in the "Kroll Show". You also may recognize her unique voice in a animated movies such Zootopia, The Lorax, and in Fox's "Bob's Burgers". Her career in television and movies is far from over, as Slate has a variety of future projects coming out. She will be voicing a character in the upcoming third installment of Despeciable Me 3 and an upcoming drama titled Aardvark. However, if you can’t wait and need your Jenny Slate fix now (and we don’t blame you), then you can go see her in Gifted, which is in theatres right now!