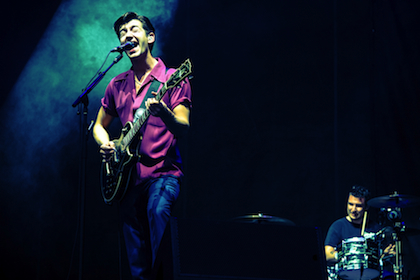 It’s starting to get really chilly here is SoCal with the wintery season blowing in. If you haven’t been listening to the Arctic Monkeys, then there isn’t any better time than now to start. See what I did there?

Arctic Monkeys just released their latest album, AM, early last month, and it reached number one on the UK charts!

Check out their song “Do I Wanna Know?” from the album:

The appeal of the Arctic Monkeys comes from their unique style and their experimental ways that can be traced through their five different albums. Their early albums, Whatever People Say I Am, That’s What I’m Not, and Favourite Worst Nightmare, were on the angsty, punk vibe taking on various life trials.

“Fake Tales Of San Francisco” from Whatever People Say I Am, That’s What I’m Not

Their third album, Humbug, is where they transitioned into a different style than usual, exploring different sounds and styles of rock.

Suck It and See, their fourth album, is where they really come into their own style and mature as artists.

The band consists of Alex Turner, Matt Helders, Nick O’Malley, and Jamie Cook. The band was recently a guest on "Jimmy Kimmel Live", but their performance on the show wasn’t aired due to time and schedule conflicts. We are still waiting for a rescheduled performance (ahem, Jimmy!). They will be continuing their hectic touring schedule as they head off to Europe!

Check out their website for fan forums, photos, videos, and their official store!

And if you can’t get enough Arctic Monkeys, head on over to their YouTube channel with all of their music videos and band interviews!