All Aboard! Train Hits the Road to Promote New Album & Shows No Signs of Slowing Down! 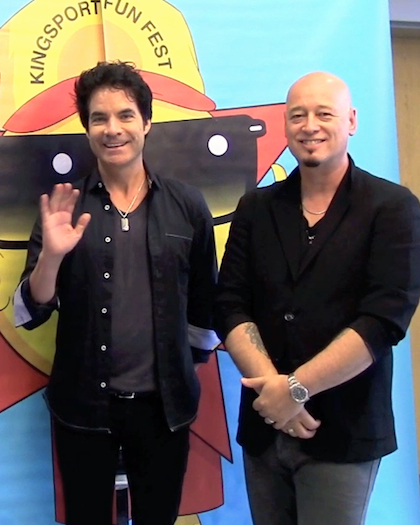 A lot has changed for Train since they sat down with YH three years ago. They are now touring the world, venturing into new businesses, and giving back to some great causes.

The group is currently on tour, promoting their upcoming album, Bulletproof Picasso. When asked before their show at Fun Fest how they came up with the name of the album, lead vocalist Pat Monahan told me, “Bulletproof Picasso is a name of a song, and it’s kind of a 'Born to Run'-type of song about leaving the town that you come up in. Bulletproof Picasso actually represents the band a little bit. We’ve been around for 20 years, and we’re still being played on the radio and in dorms around the world, and that’s a great honor for us.”

This will be the seventh studio album for the Grammy Award-winning band, a follow-up to their 2012 album, California 37, which featured hit songs “Drive By” and “50 Ways to Say Goodbye”.

In addition to touring and making new music, Train has also ventured into the wine business by founding Save Me, San Francisco Wine Co., which offers a variety of wines and chocolates -- “two of our favorite things,” says lead guitarist Jimmy Stafford.  Save Me, San Francisco Wine Co. donates proceeds from its sales to support one of the group’s favorite charities, Family House, Inc.

So, what’s next for Train’s Pat Monahan? Here’s a hint: it’s not music.

“I’m actually looking into getting involved in a winery and a few restaurants in San Francisco that will be kind of like little fun projects that will also be able to help some charities that are in great need of awareness really.”

Bulletproof Picasso will be released Sept. 16. To donate to Family House, Inc., or purchase Save Me, San Francisco Wine Co. products, visit their website.