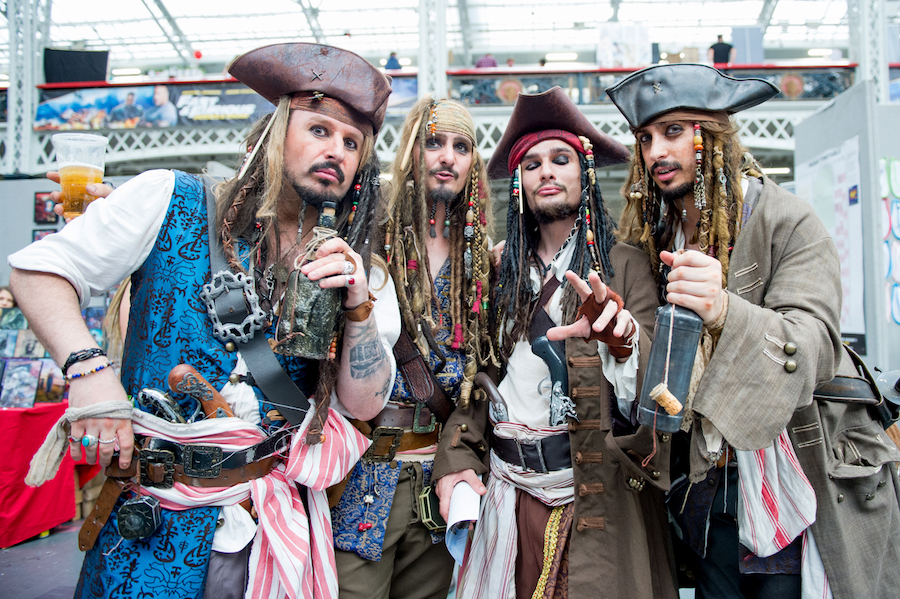 Arrrrr you ready for National Talk Like A Pirate Day?!

Each year on September 19, we get to celebrate our inner scallywag and talk in the most ridiculous way possible. Why exactly? Well, it really has nothing to do with actual pirate legend.

On June 6, 1995, two men by the names of John Baur andMark Summers were playing racquetball. After one particularly rough shot, one of them called out “Arrrr!” in frustration or pain. And, as the game went on, the men started vocalizing the rest of their exertions in pirate speak. One thing led to another, and then to another, and now September 19 is nationally recognized as Talk Like A Pirate Day.

So now that we know the origins of the holiday itself, it seems high time we learned what some of the best phrases we use on the day actually mean!

“Avast!” is one of those terms that’s in just about every pirate film but is never clearly defined. As Will Turner has shown, it’s pretty easy to embarrass yourself when you don’t use it correctly.

The funny thing is, Will technically did use it correctly – just awkwardly. “Avast” is a word meant to be used like “Hey! Pay attention!” It’s different than “Ahoy”, which is meant to be used as more of a greeting. “Avast” actually stems from the Italian word “basta”, which means “stop.”

This is arguably one of the most cliché pirate phrases that people use. It doesn’t often come up in pirate movies or literature – except for in "Spongebob Squarepants", because Mr. Krabs really seems to love it – which perhaps explains why it’s mostly just used as filler.

“Shiver Me Timbers” is, in fact, a pirate’s expression of shock. In stormy, rough waters, the support timbers of a ship would literally "shiver", which might startle a pirate crew. It’s not a phrase that was used often, but it got the point across!

Any Disney World regular will recognize this creepy phrase.

These are the words you hear just as you enter into the eerier portion of the Pirates of the Caribbean ride, and they come out as almost a warning. And while the phrase can be just that, it’s actually more of an excuse for pirates.

“Dead Men Tell No Tales” is mostly a reasoning for not leaving survivors. It pairs well with the term “give no quarter”, which means to show no mercy.

“Landlubber” is one of the more fun terms to use, as it’s kind of a hilarious insult. That said, it’s not the meanest of pirate insults.

This term is not so much meant to say someone “loves the land” more than the sea, but instead it refers to someone’s clumsiness at sea. A “landlubber” is simply inexperienced at sea.

Contrary to popular belief, Davy Jones wasn’t actually a real pirate (though he was played exceptionally well by Bill Nighy). In reality, he’s a mythological being with varying origin stories. No matter what story is used to tell his roots, Davy Jones’s Locker is known as the same thing: death.

The locker is the name given to the bottom of the ocean; to die at sea is to end up in Davy Jones’s Locker.

What are some of YOUR favorite pirate phrases? Let us know on National Talk Like a Pirate Day on September 19!