6 Classic Quentin Tarantino Films Made Even Better by Nicolas Cage! 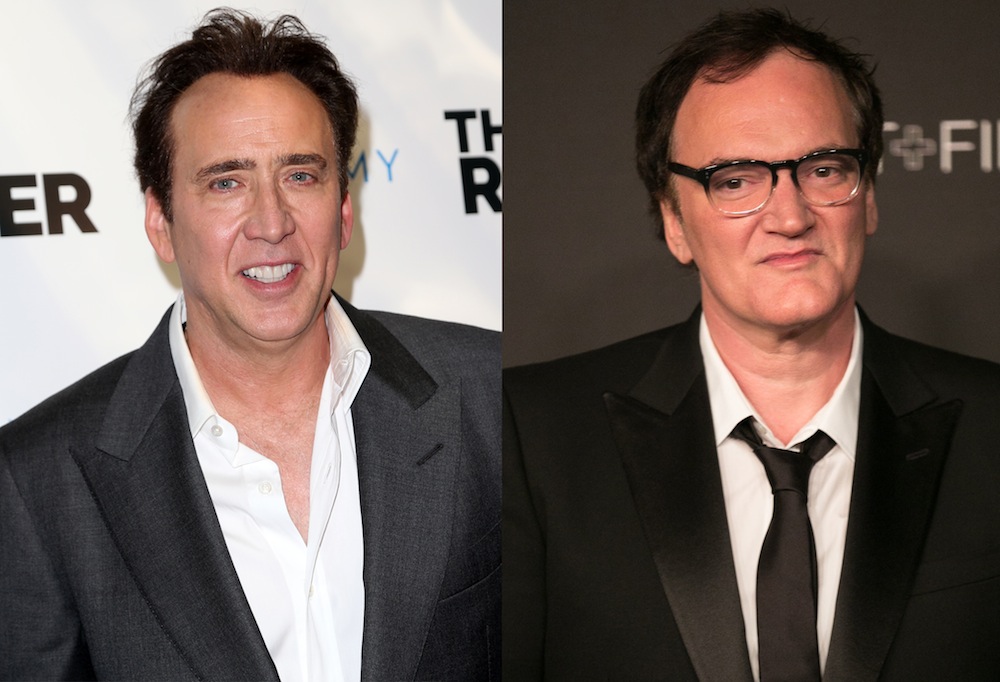 By now, we're all well-aware of actor Nicolas Cage’s legendary quirkiness, but that doesn’t mean the man is predictable by any means. He is an enigma shadowed by a veil of well-orchestrated insanity. We may never truly know the man, but we can always count on him to do the unexpected. Recently, Cage stated that he thinks he and director Quentin Tarantino could “do something quite special” together.

It all came up when Cage was asked about roles he’s turned down in franchises over the years, like The Matrix and Lord of the Rings. His response was, “I don’t really have any regrets. I think regret is a waste of time. I try to always move forward as opposed to dwelling on the past or the movies that might have happened. There certainly were movies that I probably would have benefited from if circumstances in my life allowed me to make them.” The main issue at hand, however, is, why hasn’t this collaboration with Tarantino ever happened? Which roles in each major Tarantino film could’ve benefited with the casting of Rage Cage himself? (Disclaimer: I am not counting Four Rooms or Death Proof as purely Tarantino films, as they are collaborations with other directors in my mind.)

Ah, Tarantino’s first and, as he puts it, his most “personal” movie. Reservoir Dogs came out and was a massive success for all involved, but could it have been better if it had some of that Ragin’ Cagin’ spice added to it? You bet your dog-licking behind it would’ve been better! Cage is a versatile actor who could easily play any of these roles, but I would’ve liked to see him in the lead as Det. Freddie Newandyke, a.k.a. Mr. Orange, originally played by British actor Tim Roth. It just would’ve been great to see a more anxious and completely on-the-edge character that Cage would’ve brought to the table. He probably would’ve thought he was an undercover cop pretending to be an actor in a movie during all of production.

Harvey Keitel may have done well in his role as the fast-thinking, always cool crime cleaner called “The Wolf” in Pulp Fiction, but I think this character could’ve been improved with the high-octane antics of Cage speaking fast and getting loud when dealing with cleaning up a corpse. It’s debatable, but The Wolf’s most famous quote in Pulp Fiction is “It takes 30 minutes to get there. I’ll be there in 10.” And the Wolf gets to his destination in just under 10 minutes. Now, imagine if Nic Cage was “The Wolf”. It’s obvious that he would get all Ghost Rider on that trip and make it there in 5, tops.

Robert Forster had a very good turn in this movie as the likeable Max Cherry, who gets mixed up in a bunch of trouble in this sort-of heist movie. This role would’ve been completely different in the best way possible if Nic Cage popped this Cherry. In the film, Samuel L. Jackson plays a sociopath named Ordell Robbie. Although they don’t have many scenes together, if Nic Cage was Cherry instead, it would’ve been great to see him go head-to-head and match insanity with Jackson as Ordell.

He didn’t have many lines, and they were all in Catonese, but Cage should’ve been the Chinese master Pai Mei. He is the one who teaches “The Bride” the Five Point Palm Exploding Heart Technique, which she uses several times throughout the film. He'd look absolutely ridiculous sporting an epic goatee and the largest eyebrows I’ve ever seen in my life. All of his hair is blindingly white too. It is also inserted into the film that Pai Mei is racist, especially towards Caucasians. Cage being a Caucasian and not able to speak a word of Cantonese would’ve been a surreal treat to see in this role. Tarantino also would’ve been forced to do what he originally wanted to do with Pai Mei, which was to dub over his Cantonese the whole time with English. But then again, for all we know, Cage can speak Catonese. Maybe he can even speak every language on the planet. Somehow it wouldn’t surprise me.

I know what you’re thinking -- I’m going to put Cage in Brad Pitt’s role of Lt. Aldo Raine, or maybe replace Christoph Waltz with Cage as “The Jew Hunter”, Hans Landa. Well, you’re wrong! I think Cage would’ve excelled in Eli Roth’s role as Donny “The Bear Jew” Donowitz. Nothing against Roth, but seeing Rage Cage go H.A.M. on a Nazi with a baseball bat while screaming obscenities would be a treat for all ages to see.

And Tarantino’s final film before the upcoming The Hateful Eight (due out Christmas day), as well as Tarantino's first true western. This is a tough one to pick, as there are great performances across the board from Leonardo DiCaprio, Jamie Foxx, Samuel L. Jackson, and Christoph Waltz. But there is one extreme character I could’ve seen Nic Cage playing, and that’s replacing Don Johnson as Spencer “Big Daddy” Bennett. You may know Big Daddy best as the leader of that rag-tag KKK that spends much of their screen time arguing about cutting the correct holes in their white sheets to see better.

Hopefully, a real-life collaboration between these two will happen one day. I mean, we’re talking about the star of National Treasure here, which is ironic because that is exactly what Cage is himself! So, the only question left is, what are you waiting for, Tarantino? Make the choice we all want you to make and get Cage in your next movie!