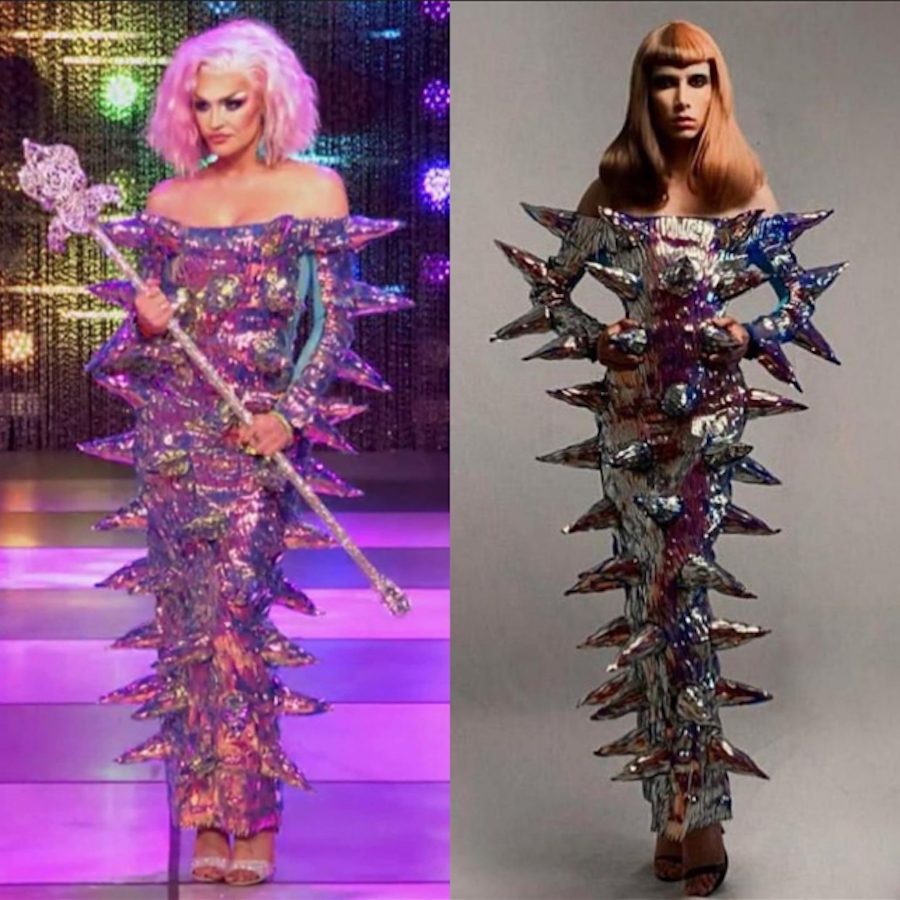 Fashion is EVERYTHING when it comes to breaking down looks from our favorite queens of "RuPaul’s Drag Race". Each season, millions of viewers tune in to see which contestant has the Charisma, Uniquness, Nerve, & Talent to be crowned America's Next Drag Superstar, as well as the spot-on impersonations from the “Snatch Game” episodes and the big music and dance episodes prior to the show’s finale.

But one thing that all fans of the show tune in for is the FASHION, HUNTY! Each week, the queens pull out all the stops and create the most extravagant fashion moments. Some contestants also create lewks inspired by high fashion couture brands like Alexander McQueen, Valentino, and more.

Like the girls, we’re inspired by the people at @fashioncandrag as they share with us the many looks of "RuPaul’s Drag Race" and where the queens get their inspired from!

1. The Symone and Moschino

"RuPaul’s Drag Race" Season 13 winner Symone (@the_symone) worked the runway during her red carpet look at the finale. Her inspiration for the night was Moschino’s hot pink purse dress, which had us clutching our pearls and handbags. The dress included purse clasps as accents and the iconic boot purse and hat.

Another winner on our list is veteran "Drag Race" superstar Kylie Sonique Love, winner the Season 6 of "RuPaul's Drag Race All Stars". The crowning moment of her dress was inspired by the spiked dress from Bcalla from their Swim With The Tide But Faster collection. The prickly creation serves us some holographic looks with hues of pink and purple.

We’re only halfway through the new season of "RuPaul’s Drag Race All Stars, All Winners" edition and have already found our winner through Jinkx Monsoon (@thejinkx). The comedy queen and fan favorite graced us in the early days of "RuPaul’s Drag Race" as the winner of Season 5. This time, she’s serving us lavender looks with an Alexander McQueen-inspired flower dress from 2007.

Groundbreaking, inspired looks from "RuPaul’s Drag Race" Season 9 runner-up and "Drag Race All Stars" Season 5 winner Shea Couleé took the HAUS down during the "All Stars, All Winners" premiere last month. Shea elegantly worked the runway in a floral-printed Valentino gown and robe from the House of Valentino. The look was so perfectly executed that Vogue took notice in their recent article on the queen.

Season 6 contestant of both "Drag Race" and "All Stars" made us gag with this look inspired by Thom Browne. The couture version of the dress was worn by Cardi B during the 2019 Met Gala in New York. According to the post, it took 2,000 hours to make the dress and 35 people to assist the rapper into it.

There are many other inspired looks on @fashioncandrag's feed that we loved and enjoyed the backstory to the looks. Check out "RuPaul’s Drag Race All Stars, All Winners" right now on Paramount +!