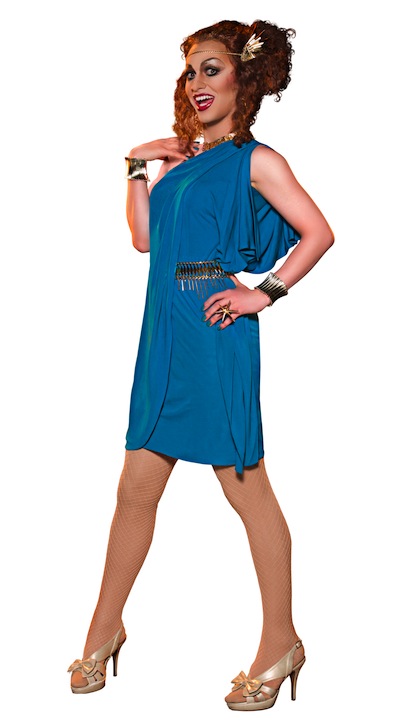 Jinkx Monsoon has been dubbed Seattle’s own premiere narcoleptic Jewish drag queen! Currently a finalist on Season 5 of “RuPaul’s Drag Race”, Jinkx has been in the Top 3 for eight weeks in a row and has been proving to the other queens that it’s Monsoon Season with their wit, charm, and vintage sense of style. Originally from Seattle, Jinkx (born Jerick Hoffer) graduated Summa Cum Laude with a degree in theatrical performance from Cornish College in Seattle and hasn’t stopped performing since. In addition to performing as Jinkx Monsoon, Hoffer has appeared in a number of musicals in Seattle. They are also the second-half of the musical duo, The Vaudevillians, a 1920s revival act.

Jinkx loves to laugh, and they laugh a lot during our chat. Friendly, goofy, and extremely down-to-Earth, I found myself instantly drawn to Jinkx. I believe that they may be the long-lost drag sister that I never had (and have now finally found!).

We discussed the importance of vintage fashion, Jinkx’s friendship with fellow “Drag Race” competitor Ivy Winters, and where the phrase “water off a duck’s back” came from. Enjoy, hunties!

YH: Are you excited for the finale of “Drag Race?” How have you felt about the show since watching it, and how do you feel you have changed since?

JM: I am terribly excited for the reunion! I refer to myself now as “Jinkx 3.0.”  I’ve learned things that I never would have learned without doing “Drag Race”. I’ve got this whole new experience to draw from for inspiration, for my drag persona. I feel like I’m doing Jinkx on a whole new level these days. It’s really exciting.

YH: You have mentioned on the show that your grandmother has had a huge influence on you and helped you first get into drag. Could you tell us a little bit more about her?

JM: My grandmother was a really cool lady. We were super close while I was growing up. My grandma, my aunt, and I were like three peas in a pod while I was growing up. I used to go to grandmother’s house for the weekend and say that I was just staying there for the weekend, but I was actually going out to drag clubs in Portland. My grandmother helped keep it a secret because I didn’t want the whole family to know. That’s how I started drag originally. She sometimes helped me pick out drag outfits. She would lend me her gaudy jewelry. [laughs] I would check in with her before I would leave.

YH: How did the persona “Jinkx Monsoon” first come about?

JM: I kind of created Jinkx based on my favorite female characters, like Edie Monsoon from “Absolutely Fabulous”, and a little bit of Ted Bundy. I was just really into TV moms. I was really into the aesthetic of Stifler’s mom, of the cougar moms, I just thought that it was really funny. It sort of started there. After I worked with Jinkx for a couple of years and developed her, I realized that I was just doing an impression of my mom. [laughs] Jinkx is a combination of my favorite comedians, TV moms, and my own mother.

YH: You are also a trained singer and you have a theater background. Can you tell us about some of the shows that you have been part of, and any upcoming shows?

JM: Some of my recent performances in Seattle have been: I played Moritz in Spring Awakening, Angel in Rent, and then I played Hedwig in Hedwig and the Angry Inch. That was a really fun show. We’re hoping to take it on a multi-city tour of the Northwest and California. That’s a down-the-road tour. I will be in the concert version of Hairspray later on this year in Seattle, playing Velma Von Tussle. I am premiering my Vaudeville musical show in July in NYC. That’s  a musical comedy show that I do with my musical partner, Richard Andriessen.

YH: What was the hardest part about being on "RPDR"?

JM: The hardest part for me was being away from my best friends and my family. For me, drag is a very collaborative thing. It was really hard to be on my own, and to not be able to bounce ideas off of my collaborators. It was hard to not have my best friend there to chit-chat with about outfits. I knew what I was getting into, so I just tried to stay focused.

YH: Where exactly did the phrase “water off a duck’s back” come from?

JM: My drag sister in Seattle, Robbie Turner, who I  worked with for a long time, she used to say that to me when I would be nervous about fellow queens critiquing me at our shows. She used to say to me, “Just say 'water off a duck’s back.' Don’t let it phase you." It’s kind of a sisterly thing between me and one of my favorite sisters in Seattle.

YH: Let’s talk about Ivy Winters for a moment. Have you two gotten to spend any time together since the show has ended?

JM: [laughs] I’ve stayed with Ivy when I was in New York. I was doing some shows in New York and Chicago, so I stayed at Ivy’s place for about a week. But we’re just good friends. She actually has a charming boyfriend. It was really just a silly crush. I really just value our friendship.

YH: How did your narcolepsy affect you on the show?

JM: There are different cases of narcolepsy that have different symptoms. I’m lucky enough to have just moderate narcolepsy. I’m lucky that I have a milder version. You accept that it’s something you are going to have to work with, but you shouldn’t let it stand in the way of doing what you want to do. But like I said, I was lucky enough to have moderate enough symptoms that it doesn’t stand in the way too much, just a little bit. I’ve learned to work with it, not against it.

YH: Do you have any make-up and fashion tips for us (and those of us who secretly want to be drag queens)?

JM: I really think that 1940s pin-up style is having a resurgence. It’s kind of having a fashion moment in Seattle, with the victory rolls, the bright red lips, the pencil skirts, etc. That’s a style that really excites me. So, that’s my little tip -- don’t be afraid to bring old styles back, we’re living in a vintage era!

You can vote for Jinkx to be crowned America's Next Drag Superstar by logging on to the show's Facebook and Twitter pages. The winner of "RuPaul's Drag Race" Season 5 will be revealed on May 6 on Logo!