5 Thoughts We Had After The "Riverdale" Season 2 Finale! 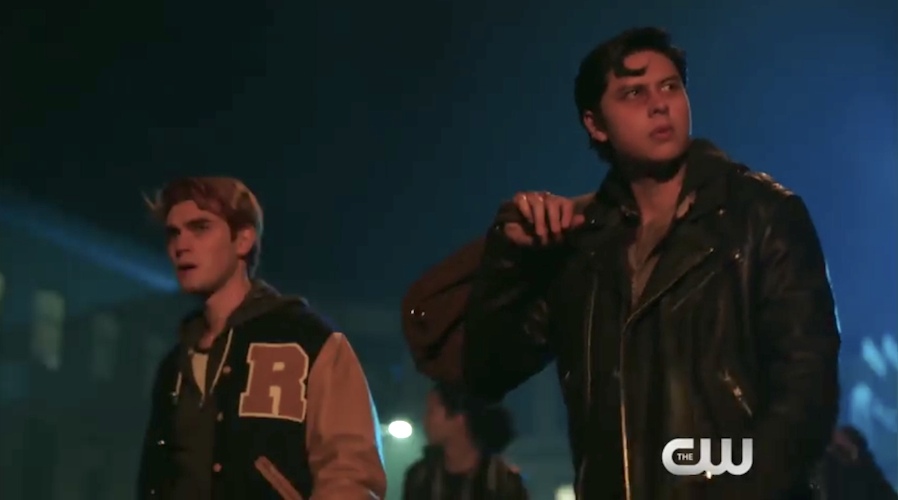 And with last night's season finale of one of The CW’s hit shows, I’ll give you my best Jughead Jones narration and try to simultaneously intrigue and forewarn you of the turbulent happenings taking place in "Riverdale"...

Fair warning, spoilers are ahead! To refresh your memory on last week’s episode, and really this entire season, Hiram Lodge just sucks. He is absolutely responsible for the beat down Jughead endured by rival gang the Ghoulies and the young crusader’s untimely death… or so we are lead to believe. The beginning of the episode has an eerie vibe, as the last time we saw Jughead, he was bloodied and bruised and in the arms of his father FP, reminiscent of scenes in a certain other teen drama...

Anyways, Jughead survived, because were the writers really going to kill off half of our beloved #Bughead? Speaking of Bughead, Betty is dealing with the unfortunate fact that her father is a disturbed murderer known as the Black Hood -- no big deal, just the BIG question lingering throughout the entire season -- who had the capability of doing such gruesome things to Riverdale’s residents. Say hello to Hal Cooper.

Betty’s BFF Veronica is on a mission to undermine her father and save the South Side from being taken over by the Lodge empire. In the words of her own mother Hermione, “Pobrecita!” Every time Ronnie thinks she is one step ahead of her father, he proves to be several steps ahead of her. How, you may ask? Well, at the end of the episode (and the moment that honestly made me very close to yelling at my television screen), Hiram had his right-hand man, Sheriff Minetta, arrest Archie Andrews for the murder of Cassidy Bullock. Don’t remember who that is? Well, Cassidy is the guy Hiram’s other, now deceased, right-hand man Andre killed at the lake house when he tried to rob and harm the gang. Are you confused yet?

The real loser of this whole episode is Archie, as everything seems to be coming full circle for him, and it’s not a Lion King moment. In the "previously on" portion of the episode, we are reminded of Archie vowing to fight for Hiram and threatening each and every one of his enemies that he would be “watching” them. Well, that same speech surfaced in the finale, but this time was directed at Hiram. Archie bluntly told his girlfriend's dad, “Whatever you do, I’m gonna be there, watching.” Cue Hiram having his daughter’s beau arrested for murder. Because nothing is more important to him than his master plan: funneling drugs (via Claudius Blossom) through his newly developed prison (so Archie will be his first inmate?) where Malachai and the Ghoulies will deal product and Penny Peabody will supervise. Oh, and let’s not forget the brothel Penelope (Madam) Blossom has taken it upon herself to secure in this new South Side. Disturbing.

So, at the crux of it all, it’s Hiram’s world, and the rest of Riverdale is just living in it.

It’s pretty clear that Betty won’t be the only one channeling DARKNESS in Season 3... although she said in the finale she was so over and done with that side of herself. Mm-hm. Here are some things to think about going into hiatus season!

1. Does Mrs. Lodge still love Mr. Andrews? I’m definitely getting that vibe. I mean, we know Hiram would throw his wife under a bus to get away with any of his hidden agendas, so it makes sense Hermione would still pine over her lost lover, Fred. There were a couple of stolen glances throughout the episode that made me think Mrs. Lodge definitely has the hots for her daughter’s boyfriend’s father. Cue the "Gossip Girl" reference.

2. So I guess the girlfriends of Toni and Jughead are joining the serpents? Cheryl is definitely embracing the Serpent lifestyle with her newfound independence from her mother, and Jughead sweetly invites Betty to join his world. Time will tell, but I doubt either girl will have any reservations.

3. Penelope Blossom momentarily shows compassion for Cheryl, warning her not to be at the White Worm at a certain time… as police (coughMinetta) are going to invade the space. In case you hadn’t guessed, Hiram also took over the Serpents' cherished hideout.

4. Polly Cooper has some serious questions she needs to answer… like, what is her endgame? What is her motive behind bringing a healer from the farm to help her mother? Since when are you nice to your mother? Since when are you in Riverdale?! We saw that twisted little smirk you shared with your mother, Polly, after offering her some "guidance". Maybe Hal got it wrong, and Polly is the the “only one who understands” him, not Betty...

5. Good news to end on: Fangs isn’t actually dead! FP revealed to Jughead that the sheriff’s department lied about the Serpents losing one of their fellow brothers.

I’m exhausted just thinking about all the storylines for Season 3. To be honest, I’m just grateful the finale didn’t have a "is he/she dead??" cliffhanger because there is only so much death to occur in one town. Don’t you agree? Well, with that, ladies and gentleman, I bid you farewell. Here’s hoping Archie survives prison...