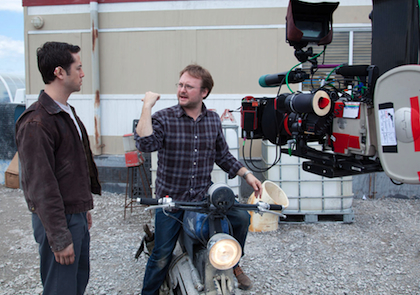 As you probably know by now, Rian Johnson has been tapped to take over the reins from J.J. Abrams and write and direct Star Wars Episodes VIII and IX. This is grand news for we Star Wars geeks, and here are five reasons why:

1. He wrote and directed Looper:This game-changing sci-fi film takes place in a future where, when the mob wants to get rid of someone, the target is sent to the past, where a hired gun is waiting to kill them. However, things go a little awry when hitman Joe (Joseph Gordon-Levitt) learns that the mob is preparing to “close the loop” by sending back Future Joe (Bruce Willis) to be killed -- by himself! It’s fascinating to see JGL made up to look like Willis, and the two play a delightful game of cat and mouse trying to kill one another. Johnson brings a humanistic touch to the tale, which is quite difficult to do when you consider the outlandish premise. This bodes well for Star Wars, which takes place in a galaxy far, far away... the films will need a director who can make a fantasy believable.

2. He wrote and directed Brick:Also starring Gordon-Levitt, Brick is a modern-day film noir, in which a teenage detective delves deep into a crime ring to investigate the disappearance of his ex-girlfriend. Brick is wholly original, and the dialogue is sharp and witty. Let’s face it: as creative as George Lucas is, his dialogue fell a little flat. It will be nice to have a Star Wars film with clever banter. Despite the fact that many of Brick’s characters are archetypes, Johnson gives them distinct personalities and looks. It also helps that Johnson is inspired by the anime Cowboy Bebop, one of the most innovative animes ever made. I’m sure that Johnson will bring some of that same flair to Star Wars.

3. He’s directed episodes of “Breaking Bad”: Johnson has directed a few episodes of one of the best TV shows ever made, “Breaking Bad”. More specifically, he directed what many (including myself) consider to be the best episode of the entire series, “Ozymandias”. Aptly named after Percy Shelley’s poem of the same title, “Ozymandias” takes place right before the series finale. In this suspenseful and bleak episode, Walter White’s (Bryan Cranston) son (RJ Mitte) finally learns what his father’s real career is. In a scene that proves every actor on this show deserves an Emmy, Walter attempts to force his family to leave and doesn’t handle their refusal very well. Had it not been for Johnson’s careful direction in this scene, it would not have been as powerful; it is one of the reasons this episode scored a perfect 10 out of 10 rating by thousands of viewers on IMDb. Although Star Wars typically doesn’t have scenes as dark as those in “Ozymandias”, they do have their thoughtful moments. Assuming that there will be a rather desolate scene in the next two films, I’m sure Johnson will handle it beautifully.

4. Hopefully Joseph Gordon-Levitt will be in the next two films: There is no way to know this for sure until the casting for episodes VIII and XI begin, but I’m hoping that it may include JGL. Johnson has worked with him on multiple projects, so the two already have rapport that seems to work. I can perfectly envision Gordon-Levitt as a Jedi (I think he would look rather dashing, don’t you?), or even as a villain.

5.) He made a short film called “Evil Demon Golfball from Hell!!!”: This was actually Johnson’s first short. The film was made in 1996 and was included as an Easter egg on the Blu-ray for Looper. The short is entirely in black and white and has a rather Poe-meets-David Lynch feel to it. Check it out below:

In my humble opinion, anyone who names their first short “Evil Demon Golfball from Hell!!!” is fine with me to direct Star Wars.

Are you excited that Rian Johnson is directing Star Wars Episodes VIII and IX?