4 Reasons Margo Roth Spiegelman from 'Paper Towns' Will Be Your New Spirit Animal! 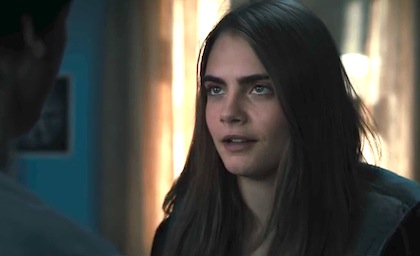 Margo Roth Spiegelman is more than just a mystery in John Green’s best-selling novel Paper Towns. She is one of the most thrill-seeking and adventurous characters that Green has ever brought to life in his long list of young adult stories. With the book-to-film adaptation now in theaters all across the nation for the “Night on the Town” event, it’s only right that we share with you 4 reasons why Margo Roth Spiegelman (played by Cara Delevingne) will become your ultimate spirit animal by the end of the film!

1. She is a risk taker and never looks back after the choices she makes.

Margo is someone who sticks to her guns when she makes a decision. When she was a little girl, she came across Algoe, New York, which was originally a paper town created on a map. She loved the idea that the fake location eventually became a real place, and thought that it was the perfect place for her to start over since she thought of herself as being a “paper girl” – someone who people create an image of without actually getting to know the real person. Without telling anyone, she ventures off on a journey to this town on her own to pursue a new beginning.

2. She lives in the present.

Life is all about learning from previous mistakes. The key to living in the present is by moving on from the lessons you’ve previously learned and to let the future play out by your current decisions. Once Margo finds out that her boyfriend is cheating on her with her best friend, she goes on a mission to get back at those who hurt her in order to move on with her life. Once the night ends, she leaves her hometown to never look back.

3. She chooses her own path.

Margo is someone who trusts her gut. She makes a decision based on her best interests and doesn’t let others interfere with her choices. She finds out that her boyfriend is cheating on her and doesn’t give him an option to win her back; she originally plans a road trip and ultimately makes it happen, and she knows that never going back to her hometown will set her free, so she chooses to venture on her own.

4. She learns to see the real person, not just a stereotype.

So often we find ourselves judging books by their covers, sometimes without even realizing it. Everyone thinks that first impressions are so detrimental, but rarely do we ever get to know a person in that first encounter. Margo comes to realize that we tend to build up images of people with our own imaginations and don’t always take the time to truly get to know someone.

Paper Towns is a must-see film that will inspire you to dig a little deeper when getting to know those around you!

And be sure to check out our interview with Paper Towns co-star Halston Sage and the author himself, John Green!