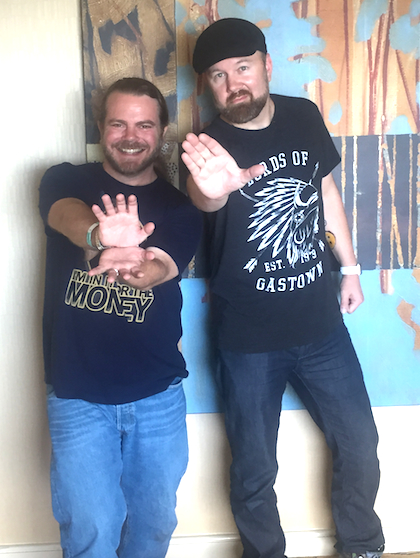 For many children of the '90s, '00s, and now, the classic anime “Dragon Ball Z” was an integral part of our childhoods (and for many, is still a huge part of our adult lives). No matter which incarnation of the show you followed, “Dragon Ball Z” was the anime that beat all animes, its quirky characters and epic battle scenes inspired us, and for many of us, inspired us to watch other animes. So you can imagine my excitement when I learned that yet another Dragon Ball Z movie will be released in theaters.

Dragon Ball Z: Resurrection F was Japan’s biggest theatrical opening of 2015 and will hit American theaters on August 4. The film will pick up after Dragon Ball Z: Battle of Gods and promises even more comedy and action-packed sequences. The film will also reintroduce one of the greatest villains to ever grace the show, Frieza (the one being resurrected).

During Comic-Con, I had the chance to chat with some of the American minds behind the series, Justin Cook and Chris Sabat. Cook, a producer for the series and a talented voice actor known for his dub of YuYu Hakusho, and Sabat, who voices Piccolo and Vegeta, both joined the series around 1999 when “Dragon Ball Z” was still fairly new to America. They told me a little bit about the new movie, the early challenges of “Dragon Ball Z”, and what it’s like to interact with their fans!

YH: Could you tell us a bit about the new movie that will be in released on August 4, Dragon Ball Z: Resurrection F?

JC: Dragon Ball Z: Resurrection F is the next chapter in the story that began with Battle of Gods. Battle of Gods was a great reintroduction to the series for a new generation, or old fans coming back. A lot of the remarks about that movie were that it had that humorous “Dragon Ball” feel, but towards the end of the movie, it reached into that action pocket that “Dragon Ball Z” held on to so tightly. This movie brings that second-half tone, that action block mentality, and really slams it across all 100 minutes of the movie. Of course, which I am sure by now is no surprise, the Resurrection F being Frieza, and bringing back one of the most notorious villains from the series has really helped to give the movie something that reaches back to our childhood as well as presenting something us that is brand new.

YH: Were there any challenges coming into voice characters in a series that had already been so well-known in Japan?

CS: FUNimation, these days, has a business model that really honors the Japanese content. Currently, everything we do, we watch in Japanese to make sure it’s right. We have translators, we have so many people in place that try to maintain the integrity of the original as much as possible. But when we started “Dragon Ball Z”, it was unique in that we didn’t even have the Japanese materials in-house; all we had was the Spanish dub. The best we could do was watch the show in Spanish. We [Justin and I] came in around the same time, which was around 1999, 2000. We were also very busy trying to copy the Canadian version of “Dragon Ball”, which FUNimation was producing in Canada, but it became kind of prohibitive to produce those episodes up there. The actors there were dropping out -- they had gone through a few Gokus, and they wanted to reign it in and record it in Dallas. We had a very unique situation in that we never really got to copy the Japanese version. We started very briefly by copying the Canadians, and then after that, we didn’t even have the Japanese to reference. We didn’t have the right materials for it. We would have to watch the episode in silence and kind of guess to what the intentions were. It was only throughout the years as we worked on the video games and Dragon Ball Z: Kai that we got a recut of the “Dragon Ball” series, that we got to know the voices in their Japanese forms. It’s funny, throughout the years we’ve adapted to changing our style to match theirs. 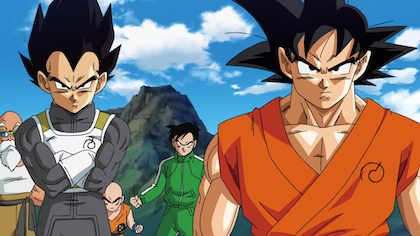 YH: Chris, you voice Vegeta and Piccolo, two of the big villains in the series. If they were to come to Comic-Con, who would they cosplay as?

CS: He would not come to Comic-Con, unless Bulma forced him to do so. If that was the case, then he would probably just wear a mask so people wouldn’t know who he was.

JC: Piccolo is going to find the highest point somewhere, and just stand and watch.

CS: If he came to the actual Comic-Con, he would come as Princess Leia. Or Poison Ivy. Plus she’s very green, so it fits.

YH: Over the years, have you two had any unique fan interactions, considering how big the fan base is for “Dragon Ball Z”?

JC: I think there have been tons of interesting fan interactions. I think what does the best service to that question is that the fans for “Dragon Ball Z” are incredibly loyal to this series. They treat it as a part of them. We feel an overwhelming sense of responsibility in talking to them or listening to their disgruntled disappointments in the series. We also hear comments like, “You were my childhood.” It’s an incredibly humbling experience. What I tend to walk away with the most is, this fanbase, unlike so many others that I have witnessed or been a part of, this is the one that is so inviting and so welcoming. The voice cast is incredible with their interactions with the fans.

CS: “Dragon Ball Z” is a very unique case, where they polled multiple times and found that 70% of people prefer the dubbed version over the subbed version. That’s really unusual for anime, as there are a lot of anime purists who only want the purist form of anime, which FUNimation is also good at providing for people. But in this particular case, they just love “Dragon Ball” in the dub. However, that wasn’t the case when we first started, because of problems like not having the original Japanese materials. We had really bad translations at the start, which I think came from translations that Japan gave us that needed to be translated again. In 1998, there wasn’t this broad acceptance of anime as there is now. FUNimation’s goal was to just get the show on TV anyway they could, and that meant if changing the content or changing a character’s name or the name of a power to make it as palpable as possible. Anime purists were not happy about that. Over time, we’ve really redeemed ourselves with them and now we have a huge fanbase.

When I first started working at cons back then, every experience was a weird one. I had never been to a Convention before. I didn’t even know they existed. I didn’t know what to expect. Some of our earliest cons were Anime Expo and Comic-Con, which are larger than life. All of them were strange. I guess we’ve been doing it so long now that it’s really hard to do something that I think is strange anymore. That’s not a challenge, I don’t think. I’ll walk around a convention and I will have a handler who is dressed up as some sort of cosplay fury type of thing, and she will walk me to the hotel or the Convention Center, and we will have to walk through a mall or what have you, and everyone will stare at us, and I’m thinking, "Why are they all staring?" And then I remember. I’m so used to this, I don’t even think twice about it.

Dragon Ball Z: Resurrection F will be released in limited theatres on August 4! In the meantime, check out the trailer: