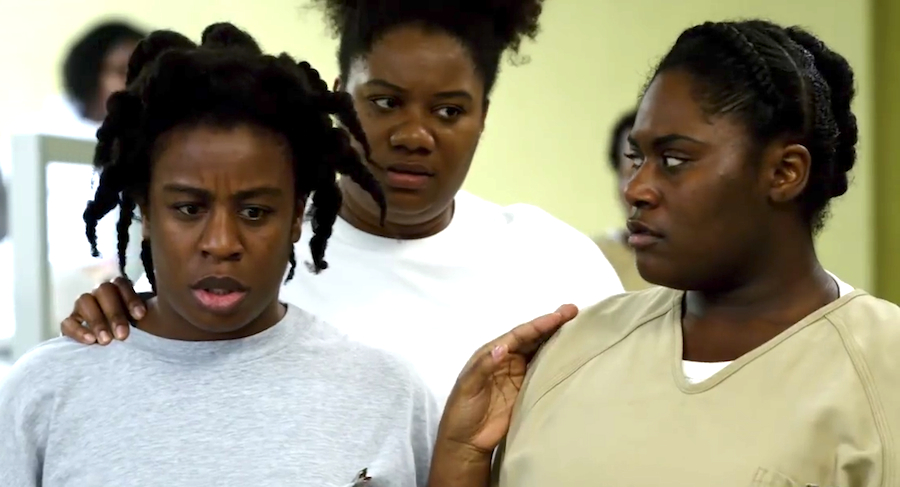 “Orange Is The New Black” is one of the most socially aware shows in the history of TV. The prison series has taken on a wide spectrum of hot-button issues, and Season 4, which debuted this past Friday (June 17) on Netflix, is no different. By now, many of you have probably finished binging the Emmy Award-winning series, but for those who haven't, look out for some spoilers up ahead!

Here is a list of 4 major social issues this season of OITNB tackled:

Perhaps the biggest shocker in the show’s history, OINTB took on the Black Lives Matter movement when Poussey Washington (Samira Wiley), an African-American inmate, was suffocated by a white prison guard during a prison-wide protest. The fan favorite’s death mirrored the real-life events of Eric Garner’s killing. The guards subsequently covered the death up, causing even more of an uproar in the jail. By using such a popular character as a vehicle for the Black Lives Matter movement, creator Jenji Kohan and company humanized the movement even more. The real-life killings are horrible tragedies, but Kohan crafted a televised tragedy to play out right in front of the viewer’s face involving a character that they knew and loved, thereby forcing us to confront our own views on the issue.

Mental health is a serious topic that the show has tackled since the very beginning. A lot of it has been through the popular character of Suzanne “Crazy-Eyes” Warren (Uzo Aduba). The beauty of how the show handles it is that they infuse a small dose of comedy without making it disrespectful. Sure, Crazy-Eyes has some funny moments, but the writers keep that in check by giving Crazy-Eyes and other characters like Lolly (Lori Petty) more serious issues to deal with as well. This balanced approach to the writing is what makes these characters so complex and what helps audience members understand the spectrum of mental illness.

Early episodes this season showed the plight of the LGBTQ+ community in prison, mainly through the story of Sophia Burset (Laverne Cox). Initial episodes in the season had Cox’s character in solitary confinement, apparently for her “own protection”. The character struggled to keep her sanity while being isolated from the world and without her necessary meds as a transgendered person. This storyline parallels the life of Ashley Diamond, a transgender woman in a Georgia prison who was kept in solitary confinement for 30 days. Much like the Black Lives Matter aspect that was tied into the season’s ender, this storyline put a face to the victim when it comes to LGBTQ+ discrimination in prisons.

While not necessarily unique to this season, the nation’s prison system is the cornerstone of the major storylines and themes of this show in general. The series shows what happens in these facilities in an unvarnished and raw way. We care about these characters like they’re our friends and family, and we get angry when they are harmed or mistreated. “Orange Is The New Black” has ignited numerous conversations about the system and has never been afraid to step into the flames of controversial topics. Here’s to hoping that the following seasons will continue the show’s record as a true trailblazer.