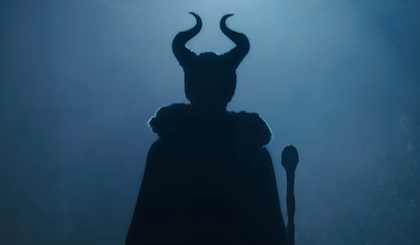 Of the entire Disney animated feature canon, I always like to go old school. And of those old school offerings, Sleeping Beauty has always been one of my favorites, for one reason and one reason only – Maleficent!

Apparently, I’m not alone in this sentiment, and Disney has taken notice by giving this magical BAMF her very own (live-action) feature, starring Angelina Jolie in the lead role, and the lovely and talented Elle Fanning as the (admittedly witless) heroine, Aurora. And NOW, the very first, much-anticipated first trailer has been released!

From the looks of it, at least aesthetic-wise, this film stays very true to Disney’s 1959 cartoon. But the live action aspect lends itself to a much darker tone – or at least enhances a darkness that was already there to begin with. (The original story, like all fairy tales, was already pretty grim anyway…)

It’ll be interesting to see how this movie spins Maleficent’s story, how she became so bent on revenge against the King and Queen and decided to take it out on their daughter. I always had a theory that Maleficent used to date the King back when he was just a prince but then he spurned her. Dramaaaaa!

Well, we’ll just have to wait and see when Maleficent hits theatres next summer. In the meanwhile, check out the chill-inducing trailer below!