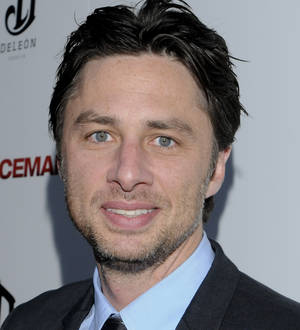 Zach Braff helped enlighten his hero Woody Allen by explaining the concept of crowdsourcing to the veteran director, who was "riveted" by the idea.

The Scrubs star launched a Kickstarter.com campaign last month (Apr13) to generate the funds needed to make his independent movie Wish I Was Here, a sequel to his 2004 comedy-drama Garden State.

Zach Braff was holding a meeting with Woody Allen when donations from fans began pouring in, but he had to explain what was happening to the Annie Hall icon.

He tells SiriusXM radio talk show Unmasked, "I'm the one who explained crowdfunding to Woody Allen. He's one of my heroes and I met him because we were talking about doing something together. Everyone else in the room was like, 'Oh my God! Congratulations! That's insane! I can't believe it (the Kickstarter campaign) worked!' No one thought it would work. And he clearly didn't know what anyone was talking about, so I started explaining it to him.

"He's riveted. We sat there and talked for about 10 minutes with him asking all of these really intelligent questions and having this discourse and it was awesome. It was like, 'Oh my God! I can't believe I just explained crowdfunding to Woody Allen.'"

Woody Allen has turned to European investors to finance his films in recent years, but Zach Braff is confident the director could raise enough money via Kickstarter to make another movie set in his native New York, adding, "I would jump at that in a second."