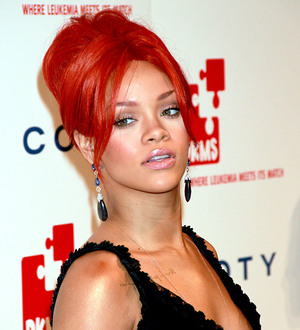 Rihanna was forced to undergo gruelling boot camp sessions to prepare for her debut acting role in Battleship.

The Umbrella hitmaker plays a tough cadet in the film, based on the game of the same name, and trained for the movie by running around a ship, swimming and weightlifting.

But Rihanna relished her demanding work-outs - because they made her feel ready to portray a sailor.

She tells Fandango.com, "One man drilled me, yelled at me, cursed me out, made me do push-ups... My best friend was there and I told her, 'I'm about to do acting class. You're gonna want to kill this man but please, just stay in the other room.' She would come in and just look around and be like, 'Did he just (swear) to her?'

"It got you really in the mentality, that's the stuff that they go through; it's not a walk in the park. I wanted to (swear) right back but he probably would have thrown me through the window! I was so scared, I just looked at him like, I swear I'll get it right, I'll be good!"

And Rihanna admits she had no problem being the only woman in the cast, alongside Taylor Kitsch, Alexander Skarsgard and Liam Neeson.

She adds, "This is how I grew up; most of my friends were guys. In this case I'm one of the guys. I'm not acknowledged as the female, no sympathy for me. She's tougher than most guys on the ship; she walks with that swagger, gets that respect... She doesn't like boys, doesn't like girls. She's just about her weapons and her work."